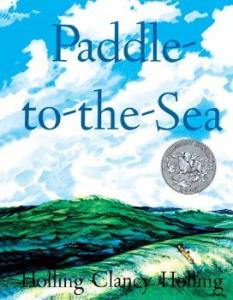 This book is way too long to read to a modern kid. It goes on forever, and it's just so wordy. It's one of those old style books where each spread has a full-page color image on one side and text on the other side, although the side with the text also has black and white illustrations around it which is kind of interesting. It describes its spreads as chapters, and there are 27 of them. They're certainly long enough to be called chapters.

I honestly have no idea if this book is racist. It's certainly not overtly racist as a book. It depicts Native Americans as living a different kind of life from the white Americans it depicts, and I'm not sure how accurate the portrayal is. Some of the white characters use language like "Injuns" and "red" to refer to the American Indians, but others don't, and it seems more like a portrait of America at the time than judging whether one group is better than the other.

At any rate, it starts off in Canada. There's a young Indian boy who carves a piece of pine wood in the shape of an Indian riding in a canoe, puts some metal on it and paints it with oil paint. He carves on the bottom, "Please put me back in water. I am Paddle-to-the-Sea." So the name of the figure is "Paddle-to-the-Sea". In chapter 2, he tells PTTS about his dream of a wooden Indian in a canoe and the whole point of it is that he starts in a pile of snow in Nipigon country, and the snow will melt and flow to the river, and the river flows to the great lakes, which flow into each other and then out to the ocean. He tells him, "The time has come for you to sit on this snow bank and wait for the Sun Spirit to set you free. Then you will be a real Paddle Person. A real Paddle-to-the-Sea."

So this is a very long book about the trials and travails of a small wooden carved figure of an Indian in a canoe as it floats down rivers and streams and through lagoons, and on and on, all the way to the ocean. Early in the journey, somebody takes the figure and fixes it up a little bit and puts a copper plate on the bottom of it with carved information about where it's been, requesting more specifically that people put it somewhere that will be useful for it to get closer to the ocean. People continue to carve on the bottom where they found it, and years later it makes the newspapers, and the original carver of the figure (who is no longer a boy at this point) hears about it in the newspaper and is happy about it. He tells the far-distant figure, speaking more to himself, "You are truly a Paddle Person, a Paddle-to-the-Sea!"

Like I said, it's so long, and really boring. It's like full-on novella length. It is very thoroughly illustrated. But I cannot imagine a modern child younger than about 12 finding this even remotely interesting. Things happen in the story, but they're so mundane that young children would be completely unable to sit still. I would classify this as only interesting to older children who are interested in the people that lived on the rivers and lakes of America in about the 1940s. It talks about lumberjacks, copper mining, and a couple of animals. It talks about fishermen, because the figure gets caught by fishermen. Large boats. A forest fire. Different lakes in the central United States. Factories. The figure goes over Niagara Falls and ends up in Lake Ontario, and is picked up by an Indian woman who has a museum, who keeps him until spring. It's just really, really long, and nowadays kids don't have the patience for something quite this boring. It just makes me think of how I don't enjoy reading realistic fiction for fun because it doesn't have enough action for me. Maybe it's just me, but it's so very far from modern children's books that it seems like a stodgy distant ancestor.

Water from the snow eventually reaches the sea. Also, people are generally helpful.

When I first saw your blog with the Message at the bottom of each review, I was strongly reminded of my professor for the Children's Literature course I took at University of Wisconsin in the 1970s. David C. Davis taught us to look for the "universal" in each children's book we read: what is it telling the children on a deep level? Basically, the message. But when I saw this review, I knew that you weren't influenced by Professor Davis, because this was one of his favourite books -- and not just because the author's name and the professor's followed the same pattern. I agree that the book with text is better suited to grade 5 and up (to adult). It's too information-dense for the little ones. But Professor Davis was so fond of this book that he devoted most of one class to it, including showing us the National Film Board of Canada movie that mercifully left out the bits teaching us in detail about iron mining in Superior and shortened the bits where Paddle sits quietly in a backwater for months on end. It really is a beautiful film and I'm pretty sure that younger children would enjoy it, and later, bring that enjoyment to the book and appreciate it in all its length and detail.