No pigeons. I feel cheated. 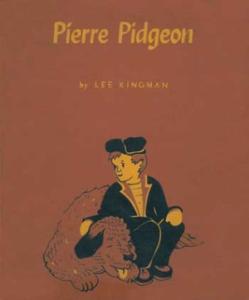 Features a little seven-year-old, almost eight-year-old kid whose father is a fisherman, but they don't make a lot of money, so his mother sells bread, which isn't really important to anything.

He likes to build model ships (they live on the ocean). He likes to go to the store where there is a ship in a bottle and stare at the ship in the bottle. But it's a dollar, which is so expensive for him, so he can't buy it.

He has an ox, and this woman comes, and the ox threatens the woman, and he helps the woman because it's his ox and the ox isn't really scary.

When he gets home, his dog jumps on him and he drops it, breaking the bottle but not the ship. He couldn't figure out how the ship got in the bottle, and the store owner didn't know how the ship got in the bottle either. His father gives him a bottle, and then he goes, “Oh, if I bend the masts over, the ship fits in the bottle.” And then he uses a fish hook and he pulls the masts up, and it looks the same as it did before, and he's all proud about it. Then he goes back to the store and tells the person how it was made. The end.

So it's a really long, meandering story that doesn't go anywhere. The pictures are really in a style that nobody does anymore, kind of blocky and colorful but with only a few colors. Peach used for skin and skies, a grey and a black and an olive green. They're kind of okay drawings, or paintings maybe. It's a 1943 book. It's dated, it's old, and it's boring.