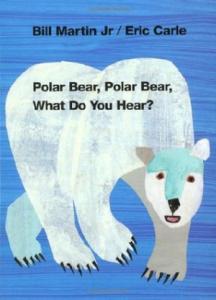 Another collaboration between Bill Martin Jr and Eric Carle, this one uses a different one of the five senses (hearing instead of sight) and concentrates more on exotic wild animals than teaching the colors.

Some of the animal noises seem bizarre. Flamingos don't "flute", they make a weird squawking, quacking noise. It's really not pretty enough to be called "fluting". I guess peacocks could be described as "yelping".

Thankfully, in contrast to the latest version of "Brown Bear, Brown Bear, What Do You See?", which takes place ostensibly in a school, this menagerie dangerous wild animals are safely caged in a zoo, being whistled at by a zookeeper. Apparently costumed children are also running rampant at the zoo, pretending to be the animals that keep hearing each other. Although the animals seem like they're rather close to each other, if each of them keeps hearing the next one "in my ear." You'd think, for example, that the (strangely purple) walrus would freak out the peacock.

Just like its predecessor in the series, this book has no plot, and is a series of questions to a series of animals, phrased in exactly the same way, and is highly repetitive. I guess this one is for the parents who have burned out on "Brown Bear" and will be satisfied with a slight variation for a while.

Purpose of your reviews?

I get that you don't like the book, but do your children? Children enjoy and learn through repetition. This book is designed for a toddler. I highly complex plot would be ineffective and leave them confused, just as I am confused by the purpose of your reviews. You seem to express that children's books should be rated on a scale of how much parents enjoy them. Most parents are at a developmental stage that is very different than that of a 2 year old.

I literally had to hide "Brown Bear, Brown Bear, What Do You See" because my toddler kept requesting it, and I was actually dreading reading it to him. It's my view that children learn no matter what, and if a parent is reading to a child, it should be enjoyable for both parent and child. Since I'm not a child, I can't speak to the latter, but I can speak to the former. I think most reviews of children's books that are aimed at the age where the child can't actually read the book ignore the parent-child dynamic, and I'm trying to fix that.