Doesn’t make much of a splash. 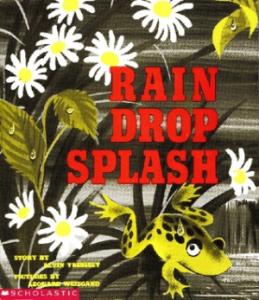 This seems to be the story of a flood but done in like a cutesy tone, so it's kind of poetic. It talks about how the rain is dripping and dropping, and how it "Fell from a daisy's face", things like that. "There were so many raindrops they made a puddle." And then it grows larger and becomes a pond, and suddenly, poof, there are fish in it. What? This is all one rainstorm, but fish kind of spontaneously generate in the pond. And the pond gets bigger. It spills over into a brook. The brook runs down the mountain, a chipmunk runs away because it's scared, some deer drink from it, and it overflows into a lake. I guess the lake was already there? But the lake gets bigger and floods a meadow and a farm, and everything gets muddy. Then it covers an entire road and the children "had to go to school in a boat". Then it goes into a river, and the river goes through the town, and then it goes all the way out through the town and the city to the ocean. Then the sun comes out and the rain stops.

Is all of this supposed to be happening in a single day? It takes place more or less in the modern era, as it mentions things like "ocean liners". I might just be out of my depth, having been born and raised in southern California, where rain is pretty scarce, but going from the creation of a puddle to the flooding of a lake seems like it would take more than one rainstorm. At least more than one day. I guess there's nothing specific that signals that it takes place over one day, but the time period seems either very short, or vaguely long with the (fully adult) fish appearing in the new pond. A whole ecosystem doesn't appear in that short of a time period, but the length of time over which the book's events occur is very nebulous. How much of it is literal? Metaphorical?

The art is dated looking and somewhat strange, in a blocky style with crisp lines at the ends of everything. My guess would be watercolor paintings. It's not bad; it's pretty typical for the time period. And the book isn't bad either, though not great, and mostly just odd.

Water flows from rain and down the mountains, and eventually ends up in the ocean.