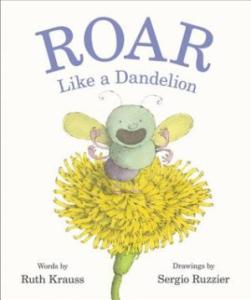 It's all right as far as alphabet books go. It's decent. It's unconventional, in that instead of the word that starts with the chosen letter being a noun, it's a verb, which is kind of cool. "I" is "ignore." "M" is "make." "N" is "nod." There's a lot of references to nature, leaves, the sun, and also to freedom. "Eat all the locks off the doors" or "Paint a picture of a cage with an open door and wait." It's all done in a prose poetry style. The layout is either one letter per page or one letter per spread, depending on the size of the illustration. This was published posthumously on the part of the author, who died in 1993, although the copyright page lists the text as copyright 2019 (maybe because it wasn't published before then? I didn't think that was how copyright worked). I wonder if it was one of the later things she wrote that didn't get completed, or if it was an earlier work that was abandoned.

Like I said, as far as alphabet books go, it's interesting. With alphabet books, the biggest problem is always the letter 'X'. In this case, the verb for 'X' is just 'X'... "X out all the bad stuff". Um, okay. And some of the lines are rather unusual, like, "Go like a road". A road doesn't really go anywhere itself. Or, "Kick away the snow and make spring come". That's not a thing you can do. And obviously dandelions don't really roar. The nonsense is more meandering than playful, which doesn't really capture my interest like Quentin Blake's better stuff. I'd put this book on the good side of "meh", but still "meh".

It's enjoyable to be outside in nature.