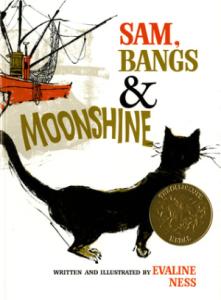 This is not a really good display of parenting on the father's part, but that's not unrealistic. There's a small island where a fisherman lives with his daughter, named Sam. She lies about all kinds of things. She says that her mother is a mermaid instead of dead. She claims to have a lion and a baby kangaroo at home, and things like that. She says her cat, Bangs, can talk. "Early one morning, before Sam's father left in his fishing boat to be gone all day, he hugged Sam hard and said, 'Today, for a change, talk REAL not MOONSHINE. MOONSHINE spells trouble.'" So she promises to do that, belatedly realizing that she doesn't really know what "moonshine" means. She asks Bangs, who responds, "MOONSHINE is flummadiddle. REAL is the opposite." This seems to confuse her even more (despite the implication that Bangs doesn't really talk and it's all in her imagination).

Sam's friend Thomas comes over. I'm not sure how old these kids are supposed to be, but it's kind of sad that they're being left alone, because Thomas looks like he's about four. Maybe it's just the art style. He seems to be younger than Sam, or else has a learning disability, because he's incredibly naive and believes everything Sam says. He rides his bike to her house every day and asks to see the baby kangaroo, but it's always just "stepped out" somewhere, and he goes to look for it. That day, she says "That baby kangaroo just left to visit my mermaid mother. She lives in a cave behind Blue Rock." So he rides off to Blue Rock. Bangs points out to her that "When the tide comes up, it covers the road to Blue Rock. Tide rises early today." But she ignores him, saying, "Pardon me while I go to the moon."

Bangs walks off toward Blue Rock. Then Sam gets upset. It starts raining and she starts freaking out. Thomas and Bangs haven't returned, and she's very upset because it's her fault. Her father comes home and she screams, "Bangs and Thomas are out on the rock! Blue Rock! Bangs and Thomas!" her father runs off, saying, "Pray that the tide hasn't covered the rock!" She waits for a long time and finally her dad comes back in. She asks where Bangs is, and he replies, "He was washed away. But Thomas is safe." He asks what happened, and she's sobbing so much that she has trouble getting the words out, but she eventually tells her father. Her father tells her to think about the difference between real and moonshine, so she lies in bed and thinks about how moonshine is having a mermaid for a mother, having a chariot drawn by dragons, or a baby kangaroo. Bangs told her that. "Or had he told her? Wouldn't her father say that a cat's talking was moonshine?" It seems like she doesn't actually know. Is she hallucinating that her cat is talking? Then she starts thinking that what is really real is her father and Bangs. And now there's not Bangs.

But then Bangs scratches at her window. She asks him what happened, and he explains, giving details that she wouldn't have known. (Maybe they're just made-up details?) She shouts to her dad that Bangs is home, and then says to says to her father, "Bangs and Thomas were almost lost because of moonshine. Bangs told me." Her father says, 'Huh?' She says, "Well, he would have, if he could talk." She says she knows cats can't talk. Then her dad says, "There's good moonshine and bad moonshine... the important thing is to know the difference."

What? He's not explaining any of this to her. She doesn't know the difference! She didn't even know what "moonshine" meant! She's just a little girl, and her dad's going away to fish and leaving her all alone because her mom's dead. It's just ridiculous. At the end, her dad brings what he calls a "gerbil" but seems to actually be a kangaroo rat given the illustration. Her father points out, "It is not a baby kangaroo." I guess it was on a banana boat and he just found it and decided it would be a good pet? She decides to give the gerbil to Thomas, who has lost his bicycle and is in bed with laryngitis. The gerbil's name is "Moonshine".

I'm not sure my four-year-old truly understands the difference between real and fake. He's only now starting to actually lie to me when I ask him whether he's done a chore. And when he first did it, he didn't understand that it was wrong until I told him. He didn't know what lying was until I explained it. And I seriously doubt he's ever heard the word "moonshine." Which to me is more associated with illegal alcohol than fantasy stories. You have to explain to children what you mean. You can't just like throw around words that they've never heard before.

Maybe the father should have been clearer. Maybe she should have an additional adult helping take care of her. And where are Thomas's parents? Why do they let him drive around the island on his bicycle? Couldn't she go stay with them? This is just a weird book, and I'm not sure how applicable the message is to children nowadays.

Lying can cause very naive people to get killed.

This was perhaps my favorite book when I first read it at about age six. You cannot read a story like this with the eyes of an adult; you misinterpret everything and in the end you understand nothing.

In reply to Lighten Up by Scott Amundsen (not verified)

She's a reviewer, that's what reviewers do!

Reviewers are supposed to be all nitpicky. It's their job.

In reply to She's a reviewer, that's what reviewers do! by Anomaly (not verified)

Thanks, I appreciate the support.