Japan's version of the fairy realm. 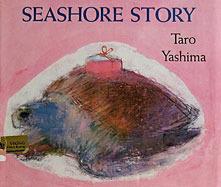 What on earth did I just read?

There's some kids who live in Japan on an island. They tell the story of Urashima, who was a fisherman. He saved the life of a turtle, and the turtle said, “I'll take you to a place under the sea.” So they went under the sea and there was a beautiful palace down there. And he ate some food.

And he stayed there for a long time, and then wanted to go back up, and they gave him a box as a keepsake. He went back up and all the people he had known were dead.

Because time passes differently in the fairy world. Always remember this.

And the only place that looked the same was a mountain, so he climbed up it and opened the box, and out of the box came a bunch of smoke. And he became an old man. And that was the end.

And the children were like, “Well, that's a weird ending.” And that's how the book ends.

The framing device for the story basically lampshades the fact that the story has a weird ending, which is even weirder.

And the magic turtle basically punishes the guy for being good.

Don't forget about those who you love. The kids explicitly point out the moral in the book.