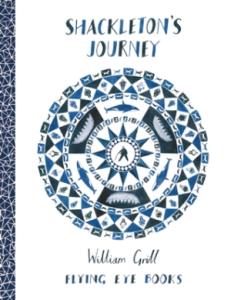 Way too many words. Skimming this, it appears to be drawings made with pastels, I would guess, with little tiny details everywhere. There's a crew with 12 people on one page and 15 on the other-- little tiny pictures-- and their names and positions on the ship. The text in this book is TINY. The book is huge, and the text is like seven point font. It's like microscopic. Too much. It seems to be an account of people sailing from England to Antarctica. I guess they're trying to reach the South Pole? I don't know.

Way too long to read to a child. I would guess this is aimed more at like middle-schoolers, maybe, despite the weird preponderance of tiny illustrations everywhere. Not even like intensely realistic illustrations, either. They're not stick figures, but they're about as close as you can get to stick figures while still retaining some semblance of weight to the characters. But, man, are they detailed.

These people crossed Antarctica in 1901.