Sir Cumference and the Sword in the Cone 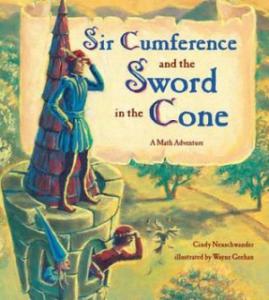 What even is this? This book is just weird. And apparently it's the fourth one in a series that are all about Sir Cumference. And the title is misleading, because Sir Cumference isn't really all that important to the story, it's more about his son Radius's best friend Vertex.

The family is sitting at a table, eating or something, and Vertex runs in, saying that King Arthur is trying to choose an heir and there are five knights competing for the honor. Vertex is one of them. He's been given a puzzle on parchment that's all about shapes, various solids. The drawings on the paper look kind of like tables, and there's a complicated riddle on it. The King has hidden his sword, and whoever finds it gets to be the next king.

Since the markings on the page look like tables, they go talk to some carpenters. The other four knights are in the courtyard acting like idiots, and they take a shortcut, a tunnel underneath the courtyard (this is really forced foreshadowing-- they could just go around the other knights). The tunnel is a cave with rats and stalactites.

Everyone in this book has really forced math puns for names. The carpenters are brothers, Geo and Sym of Metry. When they ask them about the markings, they immediately recognize them as unfolded solid shapes. What? How is that even related to carpentry? Origami, I could see. Even maybe a seamstress. But carpenters work with three-dimensional objects to make other three-dimensional objects. Their patterns wouldn't look anything like unfolded shapes.

So Radius and Vertex cut up the parchment and fold all the shapes together and try to figure out the riddle. They end up inventing what the book refers to in the afterword as as "Euler's Law" (but is more accurately called "a Euler characteristic"), which is a twos test for geometric solids that shows that when you add the number of faces of a solid to the number of points and then subtract the number of edges, the answer is always two. In most cases. In the book, it's important that it doesn't apply to cylinders or cones.

It seems unrealistic that not only would King Arthur somehow know of Euler's characteristic (Euler, its namesake, was born in the 1700s), but that given a convoluted riddle, two young men in medieval times figure it out on their own in the middle of a carpenter's shop. Radius uses the shapes they folded to make a model of the castle. They start looking in the cylindrical towers with conical tops, but don't find anything. They go up to the roof and look down into the courtyard, where all the stones are round. They somehow theorize that the stones could be the bottoms of cones or cylinders. And it just so happens that the shortcut tunnel is underneath these circles.

Once in the tunnel, they see that all the stalactites are actually man made, and all cones. They dig a few of them up, but then realize there are too many to search them all. But the riddle has something in it about proportions. They wonder if the sword is inside the cone. One of the boys decides that the sword has to be at least as long as his shovel, which is 48 inches long. Which implies that they've never seen it before. There are so many different sizes of swords out there! It could be a short sword. Or a one-handed longsword, which was usually shorter than 48 inches. So Vertex dangles his shovel through a hole, and has Radius go into the tunnel and find the cone with the right length and proportions to match the riddle. They dig it up, open it up, and find a sword in there. So Vertex becomes the prince, and explains to everyone how he did it.

This just feels inane. Who would choose an heir based on their knowledge of mathematics? Why is geometry seen as the most important skill for ruling a kingdom? It's okay, but it just tries too hard. Everything about it is strained. The character names are strained puns. The idea of the king giving five knights a parchment that's got shapes that you can put together and make the castle out of is strained. Them deriving Euler characteristics by themselves is strained. And the whole riddle of 'find my sword using this random knowledge' is strained. There's no realistic usage of mathematics in this. There's no engineering or practical application of anything. It feels like the author had an ending in mind, maybe just the title of the book, and wanted to write something based on Euler characteristics, so she had to make some kind of weird, contrived situation for them to derive Euler characteristics on their own. Everything they do is just super lucky. They happen to know about the tunnel. They happen to talk to the carpenters who happen to know about unfolded shapes. I'm just more baffled by this book than anything else. There were parts of it that were supposed to be funny, but I didn't think they were. I don't know who's going to enjoy this book. People who are really gung-ho about math, I guess.

Knowing mathematics will help you become the king? Enjoying math is mandatory.