Snow White and the Seven Dwarfs: A Modern Retelling 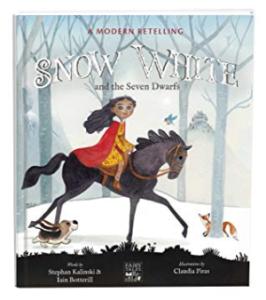 This is a very long book, and it's also incredibly wordy. It's got gorgeous illustrations. I love the idea behind it, but I think it could be better executed. In the first couple of pages, it's explained that the authors are sick of hearing stories about princesses where their most important attribute is that they're beautiful. So one night, reading to a daughter, daughters one of them changes the word "beautiful" into the word "brave" and this book was born. The idea behind it is terrific.

The book itself follows the story of the original tale of Snow White fairly closely. There's a wicked queen. She's jealous of Snow White. She has a magic mirror. Instead of asking it "Who's the prettiest," though, she asks it "Who's the bravest?" The problem with replacing a physical (although subjective) attribute with a personality trait is that with beauty, you can look at someone, without ever seeing them in any context, and see that they're beautiful. With bravery, you have to show it in action. Beauty is like a hair color: that's just part of their appearance. The queen shows very little evidence of being brave at all. It's just mentioned in like a passing that she "travelled alone from a distant land" and had "conquered her fears to start a new life in the kingdom." On the other hand, Snow White's claims to bravery seem to be mostly going on random adventures, climbing trees, and giving speeches. Most of the time when you see Snow White in action over the course of the story, what she's doing is being smart or clever.

One thing the authors say frustrated them was how princesses always need rescuing, and they did a good job there in one case. In the traditional story, the queen sends her huntsman after Snow White to kill her, and the huntsman feels sorry for her and tells her to run away instead. In this version, he ties her to a tree and is seriously going to kill her despite feeling terrible about it. She asks him to sing a song that he used to sing to her when they went adventuring, and he does, though he can't look at her. While he's singing, she escapes on her own. That's clever, and quick thinking. I wouldn't call it brave, though. Escaping from almost certain death isn't brave. It would have actually been brave if she had faced him down.

The book describes her as brave for running through the magic forest, but it's only moderately scary for some nebulous reason. There's no active threat.

Also, I understand the change of Snow White from "having skin as white as snow" like the original. That is appearance-based, and also racially limited. But they stick with the part of the written tale where her mother wishes to have a child with "blue eyes" and "black hair" and "red lips". Which is absolutely appearance-based. And, bafflingly, they also stick with the name "Snow White," justifying it by naming her after the fact that there's snow outside when she's born. Erm, okay. Why not justify it some other way? Maybe it's a nickname because she always dresses in white, like Little Red Riding Hood? Or maybe because she was once dressed in white in the winter, and someone mistook her for snow? But talking about her appearance before she was born kind of sends a mixed message about beauty not being important.

This book has some good things going for it, and as I said, I like the idea. I like some of the ways things are executed. I really like how Snow White saves herself (except it takes a similar tack to the Grimm version of Snow White-- this prince trips over her coffin like a klutz so she hacks up the apple, coming back to life in a magical coincidence). It's great that the prince, upon discovering her glass coffin, asks the dwarves to tell him about her and the story behind the coffin, instead of just magically falling in love with a corpse. But there's got to be some kind of way to change the story so she's somehow active in the eat-the-apple-die-come-back sequence. It's like one of the many versions of Sleeping Beauty, where the princess isn't brought back by "True Love's Kiss" but by the splinter of the spindle being removed from her finger. Aside from the squick involved in the details of that (you'll know what I mean if you've heard it), Sleeping Beauty comes back to life through random chance.

Anyway, Snow White wakes up, and the prince is like, 'Come on, let's go fight the Evil Queen.' And she's like, 'Nah, her jealousy is her own deal and she's an unpleasant person and she's just gonna have to live with that.' Really? Really? Cause she's pretty fricking powerful. She's got all kinds of magic stuff, and she has a specific beef with you. The reader knows the magic mirror has shattered, and somehow the queen has lost all her powers, but Snow White doesn't know any of that. (As a side note, if the queen had used the "Magic Mirror in my hand/Who's the bravest in the land" version, since Snow White leaves the area, she'd probably be safe, but the queen wouldn't have any backlash.) The point is, Snow White is still very much in danger as far as she knows, and instead heads off to go on a world tour. Doesn't seem like a very brave thing to do, unless you consider "ignoring danger" to be the same thing as bravery.

The dwarves, of course, are very PC. It's not uncommon to find versions of the story where all the dwarves are female, for example. In this case, they're mixed gender and all from different countries and cultures. Snow White teaches them to read (again, a positive action, a smart action, but not a brave one). So at the end, she wants to go "discover the seven corners of the world." And she wants to take the prince with her, as a friend. YES. Thank you, authors, for not having a "love at first sight" ending.

So the book has its problems, and it needs more polish. But it's got a lot of great stuff, and I look forward to seeing more of what these guys come up with. It looks like it's going to be a series. And if they learn what they can from their constructive criticism, they could make something amazing. Bravery is more complex than beauty, and kudos to them for trying to go for it. With a little more work, they could pull it off.