Everybody can have fun in the snow. 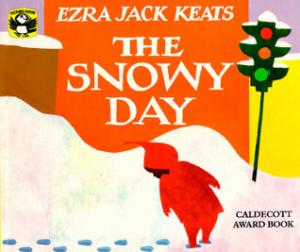 It's a pretty straightforward, basic book. It describes a snowy day with a little boy. It's fairly famous for being one of the first picture books to depict a black child just doing normal, everyday things. The main character being black is not even important to the story. For black children, they see themselves. For non-black children, they see that black children are just like them. So historically, it's interesting because of that. It was published in 1962, so in the middle of the American Civil Rights Movement.

The story: A little boy named Peter looks outside his window. Snow is falling. Everything is covered in snow. He puts on his snowsuit after breakfast and goes and plays in the snow. He finds a stick and hits things with the stick, knocking snow onto his head. He's too little to join in a snowball fight. He makes a snowman and snow angels. He slides down a snowy hill. Then he saves a snowball for tomorrow in his pocket. He goes home and his mother gives him a bath. He thinks about his day, and finds that the snowball is already melted. He sleeps and dreams that the sun has melted all the snow away, but wakes to find that the snow is still there. The next day he plays with a friend in the snow.

Nothing bad here, but nothing great. Groundbreaking for its time, but it didn't hold my attention at all. It's well-written and well-illustrated, but the story is pretty boring. It reminds me of "Lucky Song," a book about a little girl doing things throughout her day. I mean, he's got some feelings, like sadness because the snowball melted, but I don't feel like there's a lot of insight into this kid. Maybe I'd feel differently if I lived somewhere where there was snow instead of Southern California. It's a pretty solidly middle-of-the-road book. Nothing to be impressed about, but nothing to be upset about.

Playing in the snow is fun.