Sometimes My Mommy Gets Angry

Describes the problem, but offers no real solutions. 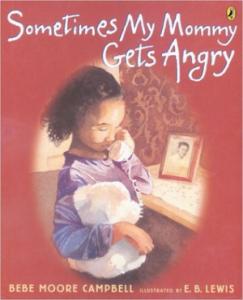 I'm conflicted about this book. I haven't been around anybody with untreated bipolar disorder (which, according to the author's note, is what this book is supposed to depict the mother as having), but given some anecdotal evidence from friends, the mother's behavior is not very common for those who suffer from bipolar, and seems more like someone suffering from drug or alcohol addiction.

The main character of the book is a girl named Annie. At the beginning, her mother is making her pancakes for her breakfast. "My mommy speaks very fast." So she's probably manic? Then there's a whole section where Annie goes to school and her friends who walk to school with her like to prank her, and other things which are rather unrelated to her relationship with her mother. She draws a picture in school of her mom feeding her pancakes.

When she comes home, she calls to her mother from outside the door, "Mommy! Come see my picture!" and the first thing that her mother says when she opens the door is, "STOP ALL THAT SCREAMING... GET IN THIS HOUSE NOW!" She accuses the neighbor of spying on her. Annie asks her mother to stop yelling, adding "But I know that she can't stop... She needs a timeout chair." She goes inside and calls her grandmother, saying, "Mommy is yelling again... Why does she get so angry? She was nice this morning. I didn't do anything bad." Her grandmother assures her that it's not her fault, saying that her mother "has problems, and that she hasn't gotten the help she needs," adding, "I hope that one day she will."

Annie basically has to make dinner for herself, which seems to be her "secret snack," consisting of raisins, peanut butter crackers, juice, and pudding. Her grandmother reminds her to "Think happy thoughts," and hopes that "Maybe tomorrow your mother will feel better." In the morning, her mother still isn't feeling better, so she gets herself ready for school and makes her own breakfast.

Annie is maybe in third grade, at the oldest. Her school still has a time out chair, and she draws pictures in class of "something happy." This is a very sad situation. I was touched by her life and the fact that she has to take care of herself when she's clearly not old enough to be given that responsibility. But it's not a happy ending. She just stays in the situation, thinking "happy thoughts," hoping that tomorrow will be better. There's nothing actionable here for people in similar situations. There's no suggestions of things that people witnessing this can do. Her grandmother is implied to be local to her, and she hasn't stepped in to stop what can be described as neglect of this child.

This book deals with a subject that is rather rare in picture books. But I'm not sure who it's aimed at. A better book on the same topic might have the mother actively seeking treatment, and asking Annie to tell her if she starts backsliding. Annie might ask her mother if she remembered to take her medicine. Annie's mother might apologize for past behavior, and seek to improve in her future actions. Annie's mother might, as people with bipolar sometimes do, decide to stop taking her medicine because if she's manic she feels fine, and Annie might remind her why she needs it. Annie's grandmother might step in if Annie's mother acts poorly for a day, and help with raising Annie.

Somebody needs to step in for this child. Clearly, she has people who love her (and I'm not suggesting that her mother doesn't love her, just that she can't competently raise her when she clearly can't take care of herself), and those people are staying at a distance, seemingly in fear of upsetting the mother. People are walking on eggshells, pretending that there isn't a problem, when they could be working to find a solution. If Annie's mother has too many of these episodes, the grandmother may need to try to get partial custody until she gets help for herself. This is a tragic story, but it's almost presented as if it's a normal way of life.

Some parents have mental illness.