The Story of Babar: The Little Elephant 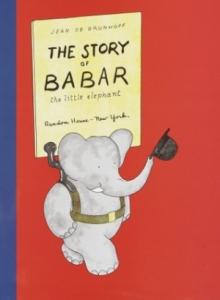 What on earth did I just read? This is a weird book. I've heard people claim it's about colonialism, but I don't know. The main character is a baby elephant named Babar who plays with his mother and loves his mother very much, and on the fifth page of the book, his mother is shot and killed by a hunter. That kind of abrupt parental demise gives the Disney company a run for its money. The hunter tries to catch Babar, but Babar runs away for several days and eventually comes to a town. He's never seen a town before, having spent his life in the forest. He's just really impressed by the city, and sees two gentlemen who are well-dressed and wishes that he had some clothes just like them. Then "luckily, a very rich Old Lady who has always been fond of little elephants understands right away that he is longing for a fine suit. As she likes to make people happy, she gives him her purse. Babar says to her politely: 'Thank you, madam.'" She does not seem at all surprised that elephants can talk or are intelligent, which makes it all the more horrifying that his mother was shot that's so weird. Nobody bats an eye at this presumably French-speaking (the original language of the book, although all of the text, even that in the pictures, has been translated into English) elephant. Although given that wild elephants only live in Africa and Asia and all the people depicted in this book appear to be European, I'm not sure where exactly this takes place.

Anyway, Babar takes the purse, goes to a store, rides up and down the elevator repeatedly until the "elevator boy" tells him to stop and get out, and then buys himself some clothes, including shoes. I was surprised this that this shop has clothing in his size, especially the shoes. The shoes have little heels on them too. Now suddenly he's walking around on two legs, whereas he was on all fours up until the point he put clothes on. I am impressed, though, that I did not notice any obvious instances in the book of him using his fingerless feet as grasping "hands", only his trunk. From then on, he lives with the Old Lady, just because. He even takes a bath in her bathtub (that's gonna be a gigantic bathtub). "He goes out for an automobile ride every day. The Old Lady has given him the car. She gives him whatever he wants." Must be nice. He takes lessons in the evening. After dinner, "he tells the Old Lady's friends all about his life in the great forest." But he misses his friends. "He often stands at the window, thinking sadly of his childhood, and cries when he remembers his mother." Two years later, two little elephants come toward him. "They have no clothes on." It happens to be Babar's cousins Arthur and Celeste, who he immediately buys clothes for. Then they go to a pastry shop and eat cake. In the forest, the elephants are searching for Arthur and Celeste and their mothers are worried. (Apparently nobody cared enough to search for Babar when he went missing. Maybe his mother was a pariah.) A bird tells them that he flew over the town and saw Babar, so Arthur's and Celeste's mothers go to town and are glad to have them back, but they're still angry with their children for leaving. Babar decides to drive his car back to the forest with all of them, and promises the Old Lady that he will come back someday. "The Old Lady is left alone. Sadly she wonders: 'When shall I see my little Babar again?'" "There is no room in the car for the mothers, so they run behind and lift up their trunks to avoid breathing the dust." Of course, there's plenty of room for three other elephants in this car. The illustrations pay fast and loose with Babar's size, although he is of course a young elephant. When they get to the forest, they find that, "Alas, that very day, the King of the elephants had eaten a bad mushroom. It poisoned him and he became ill, so ill that he died. This was a great calamity." So as they're trying to figure out who the new king should be three elephants wearing clothing drive up in a car, followed by two naked elephants running behind them. "Cornelius, the oldest of all the elephants, spoke in his quavering voice: 'My good friends, we are seeking a King. Why not choose Babar? He has just returned from the big city, he has learned so much living among men, let us crown him King.' All the other elephants thought that Cornelius had spoken wisely and eagerly they await Babar's reply." Babar says that's fine with me, but you have to understand that Celeste and I got engaged in the car so she's going to be your queen if that's all right with you. Everyone is fine with that, so Babar becomes King. "'You have good ideas,' said Babar to Cornelius. 'I will therefore make you a general, and when I get my crown, I will give you my hat.'" Because why not reward the guy who got you your position? Babar tells the dromedary (narrowing the location down to North Africa) to go into town to buy wedding clothes, they buy wedding clothes, everybody dances, and it's an amazing celebration. At the end, Babar and Celeste set off in their honeymoon in a yellow hot-air balloon.

What on earth? I'm not sure elephants can even dance. Elephants certainly can't walk on their hind legs, that much I know, but elephants are so heavy that they can't even jump, so dancing sounds difficult for them. I'm just baffled by where they keep getting these clothes and I can understand the suggestion of colonialism in that Babar associating with humans is what qualifies him to be King. I'm not sure why elephants should want to be like people, even if elephants are intelligent in the Babar universe. I don't even know how they managed to get themselves dressed as it doesn't go over that. This is just a very weird book. Babar actually drives the car with his front feet on the steering wheel (although we can't see the pedals-- who knows how he manages to not hit all three pedals with his giant feet). I wonder if he uses his trunk for the gear shift? A copyright date of 1933 places this before automatic cars. On the way to the forest, you can see that Babar and Celeste are sitting next to each other in the front seat of a car that looks like it should only seat one person based on the style. Arthur is in the back seat, dancing on top of a suitcase. It's not explained how the elephants know about cars and clothing, and why they're so impressed by it. Are they supposed to be intelligent, or simple-minded and easily amused? I don't know what the purpose of this book is. There's so many holes in the universe and the story that is told that it doesn't make a lot of sense. The characters motivations are really unclear, and it ends up being really bizarre.

I was quite disappointed

My 2 year old Son is fascinated with Elephants so I was inclined to look for stuff about Elephants. I searched on the internet and Babar came up as the best book.
I was looking forward to reading it to him before we sleep.
I was quite excited myself!
But what a disappointment! A baby Elephant who suddenly loses his mother . How an I supposed to read it to my child!
Although I read it to him . I don't like to read it anymore as it is very confusing and not engaging at all.

The story of babar the little elephant

I didn't write it.

I agree with you, but I'm not the one who wrote the story.