The Story of Ferdinand

How disturbing this book is depends on the reader's knowledge of bullfights. 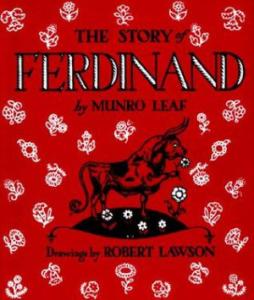 What what the heck? How did this book and the story that it tells become so popular? I vaguely remember the 1938 Disney animated short. It was only published two years prior to that, in 1936, and it shows. The writing is very simplistic. The art is pretty decent and surprisingly realistic, with the bulls and cows being drawn much more accurately than the more anthropomorphic ones in the Disney version. The first page is, "Once upon a time in Spain". The second page is, "there was a little bull and his name was Ferdinand." That's it. There's so few words per page, especially at the beginning, and it feels so rhythmically slow compared to modern books, with the exception of the ones written for very little children.

Ferdinand is a little bull. He lives in Spain. He doesn't like to play violent, roughhousing games. He sits under a cork tree. The cork trees in the book are oddly depicted with corks just growing off the tree like flowers, whereas real corks are made from the bark of a certain kind of tree (which is, interestingly enough, harvested without hurting the tree). They're strange-looking trees. He just sits and smells flowers. The book says, "His mother, who was a cow," as if his mother might be an ostrich, or something. Anyway, she's kind of worried he might be lonely, but he assures her that he's not, so she walks away and goes, okay, I guess he's not lonely. And he grows up into an adult bull and all the other bulls fight each other all day. "They would butt each other and stick each other with their horns. What they wanted most of all was to be picked to fight at the bull fights in Madrid." But why?? Do they not understand that bulls in those bullfights die at the end? That's what the bullfight is for. "Matador" literally translates to "killer." None of these bulls seem aware that being picked would end in a brief battle where they would be taunted and injured and ultimately killed. Even if they managed to somehow win the fight, potentially killing or disabling the matador, there's no way the humans would let them live. So five men come, looking for a bull for the fights, and while they're there, Ferdinand accidentally sits on a bumblebee, which understandably stings him, and he flips out. The men think, that's the "largest and fiercest bull of all", so they take him away to the bullfight in a cart. He's not depicted as being in a cage or anything, despite being believed to be ferocious. Who knows why he doesn't just jump out of the cart, since he clearly knows where they're taking him, and he doesn't want to go. And the men apparently don't realize that he's acting very calm and sedate on the way there, nothing like how they would expect a "fierce" bull to act. Unless they literally did sedate him; it's unclear when this book takes place. Then the bull fight happens: "First came the banderilleros with long sharp pins with ribbons on them to stick in the bowl and to make him mad." The next page says, "Next came the picadores who rode skinny horses and they had long spears to stick in the bowl and make him madder." And then the matador comes and "He had a red cape and a sword and was supposed to stick the bull last of all." Not mentioning that the point of him "sticking the bull last of all" is that he is going to kill him with the sword. The matador is afraid of him. Ferdinand runs to the middle of the ring. The audience thinks it's going to be a spectacle. There's flowers in hair of the ladies all the way out in the audience, and Ferdinand can smell them. "He wouldn't fight and be fierce no matter what they did. He just sat and smelled. And the banderilleros were mad and the picadores were madder and the matador was so mad he cried because he couldn't show off with his cape and sword." That part, "no matter what they did", given the pictures, doesn't look like they're actually sticking him with pins and spears. He's just sitting there and they're just dejected. What are they doing, dancing in his direction? This picture does not show him with pins and spears in him. Maybe they didn't want to depict that because it's too disturbing. But bullfights are disturbing. That's why most places consider them to be animal cruelty. It's not because they're making the bull mad, it's because they're literally injuring him by shoving sharp objects into his body to torment him, at which point he will fight a human being to the (bull's) death. Although people who fight bulls have been known to be injured or killed in the ring, it's astronomically less common than the number of bulls that are killed in the fights. Comparatively speaking, the people are in very little danger. So they give up on fighting Ferdinand, and take him home. The last pages say, "And for all I know he is sitting there still, under his favorite cork tree, smelling the flowers just quietly. He is very happy."

What? There could be a message here. I haven't seen the more recent full-length film of this, and I don't really want to, but I'm sure they had to add a ton of padding to make this 108 minutes long. The Disney short film was only 7 minutes and 14 seconds long. You could add a message. His pacifism could save him somehow. It could be explicit that the bulls would be killed, and if Ferdinand can actually communicate with other bulls, he could warn them and there could be a bull revolution. Or he could save the matador from something that was dangerous. But as it is, he doesn't seem to be getting anything out of life except getting to go back to what he was doing. Maybe that's the message: if you like to sit still, just keep doing that and people will ignore you and let you go back to sitting still.

This book is one of those where it feels like there's a message, but I can't figure out what it is. Was it just common knowledge in the 1930s that bulls were tormented and killed in bullfights? Because if so, the story becomes one of Ferdinand inadvertently saving himself from death, possibly at the expense of the life of another bull. The bull fights aren't going to stop. If it weren't for lines like the other bulls described as wanting to fight at the bull fights, it might be possible to describe the bulls as unintelligent. But that makes them clearly motivated to be a part of this ritual. Maybe they want to die? Maybe it's like a "Restaurant at the End of the Universe" situation where the bulls know they're going to die, and it's something they look forward to? If the reader knows that the bulls are going to be killed, this becomes a fairly disturbing book, but that knowledge definitely gives it a moral. His pacifism saves his life. And without the explicit knowledge that bulls in bull fights are killed, as if it takes place in some alternate universe Spain where the "sticking" isn't actually injurious (like the more modern bloodless bullfights where the bull is covered in, and the spears are tipped with, Velcro), the best message you can get is, "Through determination and perseverance, you can get people to leave you alone." I can't tell what part of this spoke to the folks at Disney, or the people who made it into a movie more than 80 years later. What message did they get out of this? Or was it just bland enough that they could read anything they wanted into it? Maybe it was just extolling the virtues of pacifism to a country that was jaded by the first World War.

Some people like to smell flowers, and that's okay. You don't have to be violent.

It’s always better to be in

It’s always better to be in the ring than sitting on the sidelines. The story is very symbolic to performers/artists. There’s something to be said about a bull that doesn’t want to go to the bullfight but he does it anyways. Some performers throw up before going on stage their entire career. Basically the fear never goes away, you just learn how to deal with the fear.

I can see the parallel, but I think it's a bit different.

I'd say that stage fright is a bit different than being uninterested in performing. The performers who throw up aren't being forced to perform, it's just that their desire to perform and their fear of performing are in conflict.

And if this story is symbolic to performers and artists, how would they interpret the ending where he's happy because he's no longer being forced to perform?

I think this is a great story

I think this is a great story for children. Young male bulls are expected to be tough and violent for the entirety of their lives. Ferdinands nature and personality are opposite of what his expectations are. There’s conflict between who he’s expected to be and who he wants to be. His mom is worried he’s lonely because he likes to sit and smell flowers, then she realizes it’s just what makes him happy. As a preschool teacher, I love this book. Think of all the children, especially males, that are supposed to be tough. They aren’t supposed to cry and are expected to like certain things that are masculine, even if it’s not who they are. Should we conform to society’s expectations of us or should we unapologetically be ourselves?

this book was printed before world war 2 — it was more popular that gone with the wind. fascists in that time were terrified of the book and hitler had it burned but when the war started, 30000 copies were distributed in germany.
i love julie’s idea. absolutely love it.
also, being at the time it was printed, i think it could have had a political meaning. he was freed from death by simply being himself. i think that’s a powerful statement in itself.