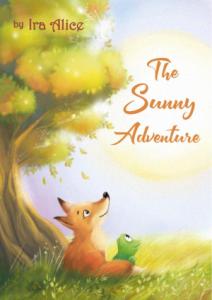 It was definitely a story, I'll give it that. The art was decent, what there was of it. There are eight pictures in the whole book, and the rest is a wall of text. And a lot of it doesn't make sense.

There's a little fox named Redkin who's told by her mother to go get some food. But her mother, unlike actual mother foxes, has never showed her how to hunt. So Redkin wanders off, not having an understand of what foxes even eat, and decides that the sun looks tasty, so she's going to bring it back home to her mother. She finds a frog, Loudcroak, who decides to help her in exchange for a small piece of the sun. They talk to a squirrel, a bird, and a rabbit, who all tell her the sun is nearby, and they keep wandering farther away from where they started. At the end, the sun goes down, and they give up and go to Redkin's home. Redkin's mom is like, 'Oh, I'm so worried about you, and I thought you'd fail, but you brought food anyway,' and Redkin is baffled, until her mother tells her they can eat Loudcroak. Redkin objects, "We will not eat him!" "Why?" asks her mother. "Because friends are not betrayed!"

I think maybe they should have hired a better translator, though I have no knowledge of how well the story reads in whatever language it was originally written in. The rowan tree where the foxes live, "which by some miracle was growing in the center of the forest". Why is that miraculous? It's a tree. In a forest. Is it out of season? Is it growing in a different country than it should? Is it the only rowan tree? Why even mention this? Most of the language is fine, however. Though characters do a lot of things "dreamily."

The author is clearly an amateur, although quite prolific. It could be a lot shorter. It's hard to tell whether the author has potential or not. They definitely tried. It's a decent showing for an amateur.

Don't eat your friends? "Friends are not betrayed"? You can't eat the sun?