T. Veg: The Story of a Carrot-Crunching Dinosaur 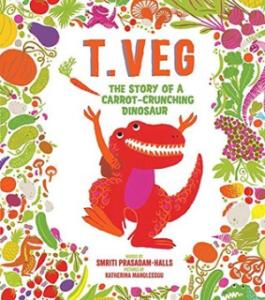 I don't know where this book is going. I'm not really sure exactly what it thinks is the most important thing to say. I'll give it this: it's got pretty good rhymes and meter. It's well-written and well-executed in the technical sense.

There's a Tyrannosaurus Rex named Reginald who eats only vegetables and fruits. The other tyrannosaurs rexes make fun of him. It oddly describes carrot cake as "crunchy". Reg eats things like smoothies, fruit, pie and cake. He doesn't really eat healthily, despite being a vegetarian, but again, I'm not really sure if this book is saying that vegetarianism is something that everybody should embrace-- it's more like it's saying that there's nothing wrong with vegetarianism. At any rate, he's as strong as the other T. Rexes. But they tell him he needs to eat meat. They taunt him so much that he runs away.

He thinks maybe he'd prefer life as an herbivore, so he tries out different herbivore type things like hanging out in river slime and mooing, but doesn't enjoy them. The weirdest part is that it says, "And when it came to foraging, Reggie didn't have a clue./'I'd better find some herbivores to show me what to do!'" What? Where was he getting all his fruit and vegetables from before if he wasn't foraging? Was he going down to the T. Rex market? No, the other T. Rexes don't want to eat fruits and vegetables, so they would grow them or forage. This makes no sense. It's an enormous plot hole in this book. The book is weird enough, and that just makes it weirder.

Then he tries to approach some herbivores, but they all run away screaming because they think that he's gonna eat them. While this is happening, the other T. Rexes are sad because they're actually missing him, and thinking maybe it doesn't matter what he eats. Then, they're walking around in search of him, and, deus ex machina, a big rock is gonna fall on them from the top of a mountain. "Reginald the T. Rex spotted them from far away./He galloped to their rescue and he bravely saved the day!" Again, what? If he was "far away", how did he get there before any of the rest of them could block the boulder with their bodies? Or before they could, you know, run out of the way? All the other T. Rexes are amazed, of course. Does a vegetarian diet make him stronger than them? It's not discussed. They describe him as "unique" and ask him to come back home, saying they're sorry (which, of course, they were before he saved them, so that whole event is really unnecessary). And they actually show evidence of this through their actions, cooking for him "a feast of vegetable kebabs,/And roasted squash and mushrooms,/Which they all agreed were fab!" And I'm really confused because I've always pronounced kebabs with a long "a" (like, it rhymes with "bobs") and "fab" definitely has a short "a", so in my dialect, these words definitely don't rhyme. It makes me wonder whether the author pronounces it differently, or has just never heard the word pronounced out loud.

The last sentence in the book is, "And then they danced the night away,/Because they know it's true.../The best thing in the world is being happy being you!" And I still don't know whether this book is extolling vegetarianism as a lifestyle that everybody should choose, or just saying that it's okay for one person to be vegetarian and we shouldn't make fun of them? It doesn't ever mention anything moral about vegetarianism, which is unusual, because very often vegetarians choose that lifestyle because of a perceived moral benefit. But this is just like, okay, there's this vegetarian T. Rex, and isn't that weird. Let's all make fun of him. Wait, he left, and now we miss him, so let's not make fun of him anymore. It's almost like vegetarianism is a random choice in this. Like they're trying to use vegetarianism as a metaphor for some other lifestyle choice that I really can't figure out. Is it metaphorical? Is this book trying to be super deep? Or is it just like so bizarre and shallow that it doesn't get that it's confusing?

I guess the the artwork is nice. It kind of looks like stamps in a way. It's not a bad book, just a weird one.

Vegetarianism is good. Or, don't discriminate against people. I really wish it would pick one.