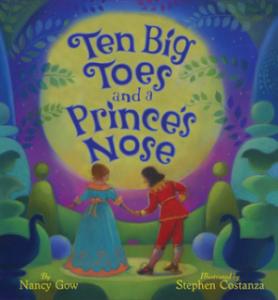 This is so sappy, and it's all written in rhyme though it really doesn't need to be.

There's a beautiful princess, but nobody wants to marry her, because she's got big feet, and that's all everybody can see when they look at her. Her mother sings her a song every night about how being yourself is awesome.

Far away, there's a prince who has a giant nose, so nobody wants to marry him. The prince's father sings to him the exact same song as the princess's mother sings.

The prince and princess are awesome people, but nobody can see past their physical abnormalities to find out. One day, they are both skiing in the French Alps, and they meet. He's wearing a scarf, so she can't see his nose, and she's not using skis because her feet can apparently suddenly become pointy instead of broad whenever she chooses. They talk, and fall in love. They each realize with trepidation that they must reveal their weird body parts to the other, and both are relieved upon finding the other's deformities. They get married. The end.

It's just kind of dumb. It doesn't have a bad message, but I was disappointed by this book. I was hoping based on the summary that it would be more interesting, rather than just, 'Hey these people met and fell in love and then they're happy.' It wasn't clever. It wasn't inventive. It was pretty run-of-the-mill. A good message, but not interesting enough to hold my attention.

Don't judge people by their appearance.