There's a Monster in Your Book 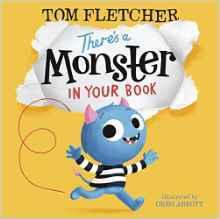 It's cute. I like the illustrations. They're pretty basic, but they're colorful. The story: there's a monster in a book. It never explains why you don't want the monster in the book (except maybe that he seems to be eating it?) so it instructs the reader to do various actions to the book in an attempt to get the monster away: shake the book, tilt the book all over the place, make a loud noise and scare him away, et cetera. And then when he is scared out of the book, it says, "There ISN'T a monster in your book anymore.... Now he's in your room! Quickly, call him back! Monster, come back!" Which calls him back to the book. "You don't want a monster loose in your room! This book is probably the best place to keep him." Then why were we scaring him out of the book in the first place? At the end it instructs the reader to be nice to the monster: pet his head, he's asleep, close the book so we don't wake him up.

Okay, what exactly is a monster? I mean, we can see it, but is he imaginary? Is he alive? Is he invisible once he gets out of the book? What what is he going to do? I don't care about him if I don't know what he's capable of, and I certainly don't care whether he's in the book or uselessly invisible in my room. Yes, it's silly, but it doesn't really go anywhere, and for me the interaction with the monster and the shaking and everything is all more contrived than, say, Hervé Tullet's "Press Here". "Press Here" doesn't imply that there's an inherent reason that you're interacting with the book except for its own sake, which is cool. This book just says, "There's a monster. Let's get him out. No, never mind, let's put him back." It's definitely not bad; it's just that it doesn't make me care.