Things to Do with Dad

No doubt more child-appropriate than "101 Uses for a Dead Cat". 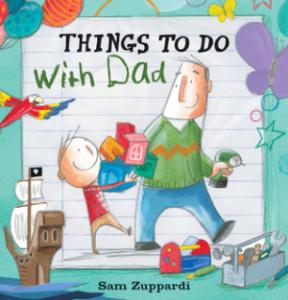 It's kind of maudlin. A little boy and his dad start out the day making pancakes and it's awesome, and then the dad looks at a to-do list on the on the refrigerator. The dad washes the dishes while the little boy plays with bubbles, and then the dad tries to build a bookcase while the little boy is playing with blocks. He tries to vacuum the carpet, but the little boy wants to play with a dragon and a sword that he's made out of cardboard and is really disappointed because his dad is busy. He takes a green crayon and modifies the list, changing the title of the list to "Things to do with dad." "Making the beds" becomes sailing a pirate ship. "Hanging up the laundry" becomes joining the circus. "Watering the garden" becomes exploring the jungle.

They seem to possibly be getting the things done at the same time. It's unclear exactly what's going on because the art style makes very little distinction between fantasy and reality. Like they're making the beds, and the little boy tosses a pirate hat to his dad, and it becomes "sail a pirate ship" but they've still got the sheet from the bed as if they're putting it on the bed, but at the same time there's like a pirate ship in the distance and they're dressed like pirates... Are they making the beds or not? I'm not sure. Instead of hanging out the laundry, they're joining the circus, so the little boy's hanging from the clothesline (which is probably a bad idea) and there's like lions and tigers and clowns tightrope walking on top of it. Instead of watering the garden, they're swinging from the hose like it's a vine.

At the end of the day, they're kind of exhausted looking and the dad's leaning against a tree and the little boy's hugging him. Is it saying, "Don't do your chores, play with your kid instead," or, "Turn your chores into a way of playing with your kids?" It's hard to understand exactly what's going on because of the illustration style. Did they successfully make the bed, or were they just playing with the sheets? I can't tell. Did he finish watering the garden before they had to go explore the jungle? I'm not sure. I guess so.

It's not bad, it's just hard to understand what's going on in this story. I'm kind of lost. I think it's important to make time to play with your kids, especially if they want to play with you, and I don't have anything against that, but it's almost shaming the father for having things to get done. Unfortunately in life, we have things to get done. It's cool that it's a dad, and that he's doing housework like washing the dishes and vacuuming and stuff like that. Hanging out the laundry and washing the dishes are more stereotypically associated with females, so good on this book for defying convention with that, and not even drawing attention to it. It's just very matter-of-fact. On the other hand, there are no females in the book, there's only the father and the son. I don't know if there's a mother and she's absent. It doesn't go into that. So some good, some confusing. It's not great, but not terrible, so it kind of ends up landing in the middle. My brain doesn't know how to interpret this book, so I suppose you can make of it what you will. But I prefer my children's books to be a little less up to interpretation, because unfortunately my brain has a tendency to go in directions that are probably not intended.

Stop slacking and play with your kids more.