Time of wonder, book of boredom. 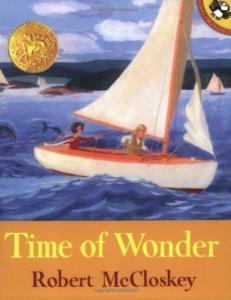 This is a long, boring book. It's bizarrely written in second person, so it keeps telling the reader what they're doing, like, "It's raining on YOU!" Wow. It's telling me how I feel; it's telling me what I'm doing. I'm not really comfortable with that.

The story is, there's a bunch of islands in Penobscot Bay and a couple of kids that live there with their family. They're either a brother and a sister or maybe two sisters, which is kind of strange for an almost autobiographical book written by a man. But he didn't illustrate it. And apparently one of the children is supposed to be "you." You're out playing in nature, sailing in a boat, watching other kids play and swim in the water. It's summertime. It talks about different times of day and looking at the stars at night. There's a plane flying overhead that waggles its wings at you when you wave. Everybody knows everybody else in this area. There's going to be a storm, and people are getting ready for it. As evening is coming, it starts raining and then it gets worse and worse. It literally calls it a hurricane, but it only apparently lasts a few hours, because by the time that you're going to bed, it's lessening. It knocks over some trees. The next day, you're looking at how many birds are leaving the island, and "It is the end of another summer. It is time for you to leave the island too." And then you go somewhere else and go back to school.

This is a super long book, and in an older style of layout where all the text is off to the left of each spread (most of the pictures span a page and a half), sitting by itself next to the pictures. So for me, when I read it, I tended to just look at the text and try to slog through it all, only briefly glancing at the pictures. I can't imagine how long this must take to read to a child, or whether a modern child would even understand half of the things that are going on in it. Most children don't live on an island where most of the inhabitants fish. It's kind of unclear what "your" parents do on a daily basis. Do they fish? Garden? Just hang out? Do they have some method of earning income on this island, with which to buy their groceries, or are they just independently wealthy?

It just drags. It's not badly written, but like many old books, it's incredibly wordy and just goes on forever. It seems older than a book written in 1957.

Living on an island is fun.

This review nailed it: boring

This book sent my granddaughter to sleep when I read it to her. And she wasn't young enough to randomly fall asleep at the time, I think she was 6 or 8. It almost sent me to sleep too. And I agree that it's annoying and presumptuous for a book to keep telling me how I feel. It's a gorgeous book, but not a read-aloud experience I wish to repeat.