Tricky Vic: The Impossibly True Story of the Man Who Sold the Eiffel Tower

The tricky thing is the point. 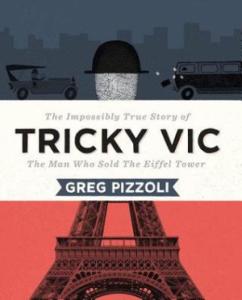 It's one of those books that I'm not quite sure what to make of. It's an interesting story; I just don't really see what they're trying to say. I feel like some readers might think that it's glorifying con artists.

It's a nonfiction book, a biography of a man called "Tricky Vic", who was actually born Robert Miller in what is now the Czech Republic, in 1890. He became a gambler (probably a cheat, but it doesn't specify). He left Europe, moved to America (although in the afterword the author states that he intentionally shifted events on the timeline to make for a better story and character development). At some point, it is rumored that he cons Al Capone by taking his money, promising to double it, and then coming back and saying he failed at doubling it but giving the original back, impressing Capone with his honesty. He made a Romanian money box, something that is supposed to print 100 dollar bills but is fake. They say it is easier to cheat someone who is willing to cheat themselves (by printing money, in this case). At some point, he leaves the United States and goes to Paris.

As background, the Eiffel Tower was actually controversial soon after its construction for the World's Fair, and it became delapidated and was widely disliked. Vic talks to a bunch of scrap metal salesmen, and have him secretly bid to him how much they would pay him for the rights to dismantle and sell the Eiffel Tower. He chooses the one who he thinks would be the best mark, and the guy gives him his life savings, and Vic leaves town, but the mark never goes to the authorities because he's so embarrassed. Vic returns when he realizes nobody knows about his con, and does it again to a different scrap metal salesman. The new guy actually goes to the police this time, so Vic goes back to America, where he joins a team of counterfeiters. Then the police finally catch him. He escapes before his trial, but is recaptured a month later. He pleads guilty and is sentenced to 20 years in Alcatraz. After 12 years he dies of pneumonia.

It's an interesting story, but I'm not sure why the author chose to tell it in children's book form. What message is he trying to send? He writes in the afterword about watching some con artists work in Paris. The book has pretty nice artwork, which is probably one of its main draws, and it tells the story in an engaging way. The artwork is blocky and cartoonish, except for Victor, whose face is shown as a fingerprint (I kind of wonder whose fingerprint it is). That's an interesting decision, because we clearly have historical photographs of Victor and he could have chosen to use one, or draw a caricature. Maybe he's trying to avoid romanticizing Victor? Also, the first mark he cons into buying the tower has a fish for a head (probably because his last name is Poisson, which means "fish" in French).

The book is just about Victor and a couple of scams that he pulls off. It doesn't really tell much about the time period (except mentioning Capone and Prohibition). It doesn't give a sense of what was going on in the world at the time, and I think that's kind of important for history. Victor just walks around doing completely outrageous things, until he gets caught and sent to jail and dies. It's hard to tell whether the author is saying that you should be impressed by this guy or not. Maybe if it went into more detail about how you could avoid being scammed yourself? I'm not even sure where I would go with this. But why did they pick this guy to write a story about?

Is this aimed at children who are into cons? You certainly wouldn't want to give it to a kid who liked to trick people and say, "This is where you should go with your life." Because there's no real condemnation of him, which is a weird thing. Maybe it's because it's nonfiction and the author didn't want to make a judgment? It also doesn't say anything about his personality. Who was this guy? We just get a list of things that he did; we don't understand why he did them other than wanting to make money. What was he doing was he doing with the money? It says he lived a lavish lifestyle, but why?

And most of the cons he pulled off weren't unique to him. The specifics of the Al Capone story, which may even be apocryphal, are his. And the selling of the Eiffel Tower (although he had an assistant). But the other cons he pulled were known scams that many others also pulled. The Romanian money box. Cheating at cards. Counterfeiting money. The book almost makes him sound like he's the only guy that's done these things. And it glosses over the fact that the things he did, conning people out of money, really hurt some of them. Poisson lost his life savings, and it wasn't even one of those "cheat a cheater" cons. He just made a mistake. It makes it seem cute, almost amusing, how he stole things from people.

Tricky Vic is an interesting person from history.