The Upside Down Riddle Book

What is it about riddles that fascinates children? 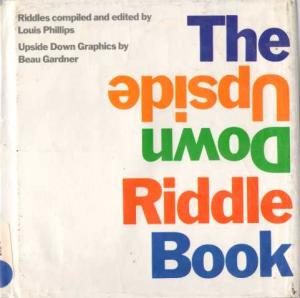 It's just a bunch of riddles and illustrations. The illustrations are the answer to the riddle, except they're upside down. But since they're objects, it's usually fairly obvious what they are, even upside down. A thumb looks like a thumb whether it's upside down or right side up. A needle looks like a needle. A pair of scissors looks like a pair of scissors. The illustrations are done in an interesting style, minimalist with extremely large blocks of color and very little detail. And the author compiled and edited the riddles; he didn't actually write them. A few of them are pretty famous, like Tolkien's "A box without hinges, key or lid, yet golden treasure inside is hid." Most of them were new to me, though.

Like I said, just riddles. Not really much to it. Nothing great, but nothing terrible, so it's okay. If somebody likes riddles, I guess they'd like this book. Obviously a child would have to be old enough to understand the concept of riddles for this book to be useful to them, but I guess a lot of children go through a phase where they're really into riddles and jokes and things like that, so this would be a good book for that. It's pretty middle-of-the-road as far as children's books go.

I think the idea was to make you look at the world in a different way, or something like that, but it kind of falls flat on that since so many of the answers are completely recognizable even when they're upside down.