Don't know much about biology. But I know more than Eric Carle, apparently. 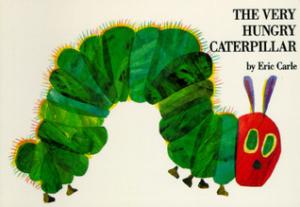 It's a pretty basic book. The language is quite simplistic. It sort of tells the story of the life cycle of a butterfly, but a little bit more poetic than that, with an additional segment that clearly is intended entirely to teach children colors, the days of the week, and how to count to five. But kids love those little die-cut holes!

I find Eric Carle's art style weird. "The pictures are collages of specially prepared papers." Apparently a new edition was released in 1987 with "entirely new illustrations, similar to, but not exactly like, the original ones." Odd. I own the board book version of this, which was given to me as a gift. I suppose I should really say I own pieces of this book, as they have torn it apart. It's one of those books that kids ask you to read over and over, but will start to grate on you after a while.

And there are some inaccuracies in this book, as far as the biology goes. For one, caterpillars don't eat random things. In fact, many of them don't eat anything except the plant type that they were born on. For example, the caterpillar of a monarch butterfly exclusively eats milkweed. Definitely no cheese and meat. But of course the Saturday page is really interesting to toddlers. My son learned the words for every single item on that page long before he could form complete sentences. But I have no idea what he thinks caterpillars eat. That section can be chalked up to "poetic license," though. The most egregiously inaccurate part is that butterflies come from chrysalises, not cocoons. And in researching this, I found that there's a big difference between a chrysalis and a cocoon, namely that a cocoon is made from silk spun by the caterpillar (which then turns into a moth inside), whereas a chrysalis actually the caterpillar itself. So the larvae of moths (and other insects) spin cocoons, but the larvae of butterflies become chrysalises. The point being that if a caterpillar spins a cocoon, it's gonna turn into a moth. I know moths aren't as well-thought of as butterflies, and they tend not to be as brightly-colored, but Carle really needs to get his insects straightened out. Especially since he has so many books about them. When I would read this book to my child, I would actually change the words so that the end said, "Then he nibbled a hole in the cocoon, pushed his way out and... he was a beautiful moth!"

And someone else pointed out to me that the butterfly wings are on upside down. He's not an airplane, he's a moth-- butterfly-- whatever. Butterfly and moth wings are wider on the top and narrower on the bottom. So either his wings are upside-down, or his whole body is upside-down in the picture and what everyone thinks is his head is actually his butt.

I've throught the same about the wings since I first read the book. I've been bugged that not enough people notice they're upside down.

Shut the fuck up

This is quite unfair. The

This is quite unfair. The thing with the coccoon or the upside-down wings is that it would be simple to get it right instead, and the story would still work. It's more like if Goldilocks and the Three Bears had them eating porridge off plates instead of bowls.

Your comment is valid enough for the criticism of the food the caterpillar eats, but the author is talking about the inaccuracy as a whole, and that's only one aspect.