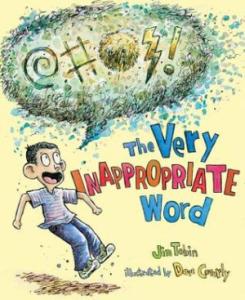 A boy named Michael "collects" words. One day, he hears a word that he has never heard before. Of course, given that this is a children's book, it's represented by a string of symbols (also referred to as a grawlix) and it's never actually said what the word is. Everybody just tells him it's inappropriate. He hears it around in different places. Even his mom says it, and his father says it's an inappropriate word. Then he says it out loud at school and the other kids learn it from him. The teacher has him come after school and help her find some new words to use for spelling words, and then he has so many other words that he forgets about the inappropriate one.

It's just kind of dumb. It's not bad; it's just not helpful. It doesn't even explain why a word might be inappropriate. It does a lot of discussing the other vocabulary words in the book, like "smithereens" and "egghead," but it doesn't explain why somebody might use an inappropriate word, or why all these other people are hearing it. He hears it at the park and "on the radio." It says, "Michael could see that there was something kind of bad about it. But there was also something about it that he kind of liked." The fact that it's taboo is what makes him repeat it to his friends and teach it to other people. From the context, I'm guessing that it is a swear word, probably the "D-word" given that he hears it on the radio, because the first time he hears it there's a boy looking at a report card who says it, and throughout the book people who say it are always upset. So it's a curse word. Why don't they go over some options of things you can say instead? I think it's really interesting to talk about words that used to be inappropriate but aren't anymore, or other kind of curses that aren't "inappropriate." What do you say when you get a bad grade on your report card or you hurt yourself? "Darn"? "Ouch"? Those don't really have the punch of some other words, and there are definitely other words out there that you can say that aren't inappropriate. You can say, "This infuriates me."

Personally, I'm not supportive of censoring oneself in casual situations. I try to censor myself in my reviews so that they're child- and work-friendly, but I think it's important to talk about "inappropriate" words and not just mention that they exist and act like filling up your brain with other things will make them fall out or something, because that doesn't happen. That's not how the world works. My kids are gonna pick up swear words. They just are, and they can't escape them. They need to understand why it is that people don't like them, even if it's hard to explain. You can say, "Some people don't like these words, and here are some things you could say," rather than just, "Hey, there are lots of other words, why don't we use some of them?" Getting an F on your report card is not a reasonable time to just yell, "Egghead!"

Use complicated words; don't use "inappropriate" ones.