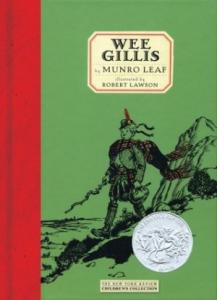 Kind of a weird book. It feels almost like a fable, but I don't think it is. It's from 1938. Strangely enough, the story isn't really contemporary. It's kind of a story of a bygone time, no matter when you read it.

There's a little boy named Gillis who lives in Scotland. His mom's from the lowland, and his dad's from the highland, and he doesn't know which he wants to be. The highlanders stalk stags very stealthily, and the lowlanders are cowherds. So Gillis spends a couple years going between the two, learning how to call the cows in, and learning how to be quiet and hold his breath while hunting stags. Then his family gets together, and his mom and dad's family both argue and try to get him to join them, standing exactly in between the highlands and the lowlands. His uncles get mad and yell at each other, and then some random dude walks up with a giant bagpipe that he's made but can't blow it. The uncles can't blow it either. But Gillis can blow it, because he spent all his time holding his breath to hide from stags, and taking in lungfuls of air to call the cows, so he becomes a bagpiper. The end.

It's kind of silly. Kind of strange. It's not a bad story. The art is all line drawings, well done. The style isn't very modern but they're pretty. There's not much to it. It's just another book where somebody turns out to have hidden talents they weren't expecting to have.

Put your strengths to use. Or, don't be prejudiced against your neighbors.