When Dads Don't Grow Up

At least they're toilet trained. 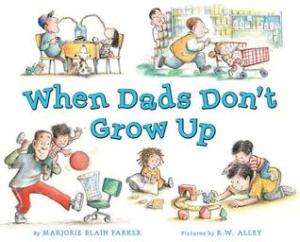 This is odd. It starts with the sentence: "Some dads never grow up. You can tell which ones they are." And then proceeds to list things that these dads do that are childlike or considered childlike. "Dads who haven't grown up still read the comics and watch cartoons." Ooh, what's next, video games? I guess it's saying that this type of father doesn't worry about looking strange. But there's a lot of adults who read comics and watch cartoons. In fact there are many comics and cartoons that are made for adults. Like South Park, for crying out loud.

Whenever books start down the path of 'it is better to be this type of person than this other type of person,' which this book is very clearly doing ("Their kids are lucky."), they risk alienating a great deal of people, children and adults alike. I don't like my books to be this judgmental. And no father is going to do all of the things listed in the book. But it's like the book is saying that all dads of this type are the same. They make non-round pancakes. They play outside. They're good at fixing things. They would rather eat in the truck than go out for a fancy dinner (although they pretend to like fancy dinners for some unfathomable reason). They get up early. They understand that basements are scary. They don't like to sit still.

It's the language the author uses that bugs me. Instead of saying that some dads (or even 'some dads who don't grow up') do X and some dads do Y, Parker makes it into a binary set of options. There are exactly two types of dads, one of which is cool. Presumably, the other type is horrendously boring. "When dads don't grow up, they understand that shopping carts are for racing." Like every single fun-loving father is going to race shopping carts up and down the aisle.

There are plenty of great fathers who don't read comics and and watch cartoons, who don't wear mismatched clothes, who prefer to be indoors instead of outdoors, who aren't good at fixing things. They can play with their kids without getting up early, for example. It's perfectly reasonable for a father to not do ANY of the things in this book and still be a great father.

I don't think this book is really intended to be for children. Most kids assume all parents are like theirs until they get old enough to realize the differences. Any child who is read this book who doesn't have a father like this is just going to be disappointed, or they're going to come up with counter examples as to how the book is wrong. This book is basically for dads who act like this, for somebody else to give to them as a present to say, 'You're so awesome as a father. Look, there's a book that's entirely about how people like you are great fathers.' I don't think it's going to ruin anybody's life. It just doesn't seem like it's an effective children's book.