As The Caterpillar said, "Explain yourself." 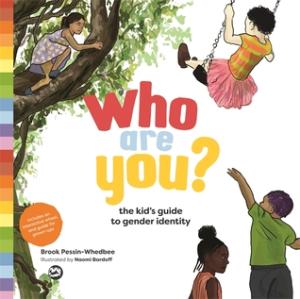 I feel like there's not enough here. What's here is good, but it's just so sparse. There's a lot of additional text for "grown-ups," but maybe that information should be part of the main text. It's not like the text is incredibly poetic and the meter would be ruined by more information. Just put it where everyone can see it. I can't imagine that the author was worried a large amount of text would be a turn-off for potential readers. And it's not like a person who is offended by the details is going to pick up and read a book with the subtitle, "The kid's guide to gender identity."

Some of the things I like are: "The important thing to remember is that you are the one who knows you best." It talks about how adults guess what gender a baby is based on their body, since babies can't talk, which is a good way of putting it. It basically says that there are many different genders, and for some people (it uses the term "cisgender", which is nice) the grown-ups guessed correctly. It lists a bunch of words people use to describe other genders, and says that there are more that they didn't list, and then says "Be who you are." If they're going to go as far as to list all the words, why not put some kind of rudimentary definition of them, as well? Maybe some of them have no agreed-upon definition, but just listing words doesn't really help anyone.

So it's not a bad book, but it could be much better.

There's a bunch of different genders.