Who Has What?: All About Girls' Bodies and Boys' Bodies 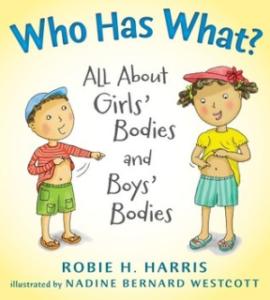 It doesn't talk about, or even leave room for transgender or intersex people. It's really basic. It takes the entire book to basically only say: 'Girls have vaginas, ovaries, and uteruses, and boys have penises and sperm.' That's it. That is the only information you can get from this book. My four-year-old already knows most of that, and my two-year-old is already asking about it. "You ha' penis?" He asks me in the bathroom. "No, I have a vulva," I say. It's not that complex. And if you don't explain the purpose of the internal organs, there's no point in mentioning them at all. I haven't told my children that they have kidneys or livers. It just hasn't come up at any point. But if it does, the physical body is not that difficult of a topic to talk about. I don't need an entire book to tell my children that some people have different bodies than other people.

So it's not inclusive of non-gender-normative people, and it's not useful to the rest of us. It's not bad, because statistically the vast majority of people will have this apply to them. It's just useless. It doesn't talk about sexuality, it doesn't talk about people not touching you, it just literally says, 'Girls have vaginas, boys have penises, the end' with a couple of associated parts.

A good thing about it is the boy and the girl that are the main characters (they seem to be brother and sister) are biracial. But other than that, it's boring, and not very useful.

Boys and girls have different bodies.