Who Will I Be, Lord? 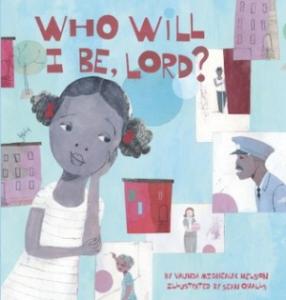 A little girl is looking back at her family: her great-grandparents, her grandparents, and her parents, and also her uncle and her cousin, for some reason, trying to figure out what she's gonna be when she grows up. There's music involved. Kind of basic jobs. Somebody's a mailman. Somebody's a preacher. Somebody is described is a jazz man but he actually works in a diner. Somebody else is a pool shark, which is kind of an odd thing to be.

Everybody's really lower class. Maybe that's good, because I guess there really isn't that much mixing of lower and upper class, so it's more realistic that way? Unfortunately, of the women that she talks about, one of them is a housewife, one of them is a teacher, and one of them is her mom, who is a “mom”. And explicitly described as, “My Mama is a mama.” As in, seems like she takes care of everybody. She visits people, she drives people around, even adults, and things like that. She looks after people and that kind of thing. So the female role models this girl has to look up to are a housewife, a mother and a teacher, which are very stereotypical female role models.

It's not bad; it's not saying that's all she can be. At the end she says it's up to her who she's going to be, which is what her mom says. So the message of the book is, “You can be whoever you want to be,” but the options it presents are very limited. While they might be realistic for her family, it's really not giving her much to aspire to, which is kind of sad.

You can be anyone you want to be.