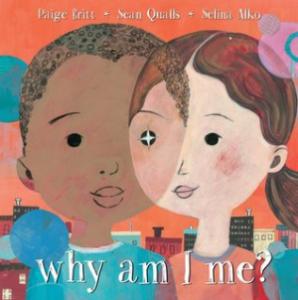 It doesn't seem to go anywhere. It kind of feels like it should be a song instead of a book. It's a poem, and not a very long one at that, that's just drawn out across all these pages that appear to be oil paintings of this little girl and little boy, apparent strangers to each other.

The girl is white. I guess the boy is black. And they look at each other and wonder what it would be like to be somebody else, and just talks about like how people are different in a very vague way. Like, "Why am I me?" And, "Who would I be if I wasn't me? Would I be somebody taller?" "If somebody was me, and I wasn't me, then who would they be?" It's so vague as to almost be mystical. At the very end, the girl and the boy say "Hi" to each other, and that's how it ends.

It's not even really examining what it would be like to be another person, and what their life must be like. It doesn't even go into that. It's just a really shallow, mystical, metaphysical kind of epistemological thing. The story only consists of two families riding on what is presumably a subway or some other kind of public transportation, and the two kids see each other and say, "Hi." But before that, each of them has this weird kind of journey to nowhere in their own head. It feels pretentious, and it doesn't say anything. I guess it's pretty. That's what the people quoted on the back seem to be raving about: how pretty it is. I'm not a huge fan of the style of the artwork. It's got kind of an interesting collage aesthetic going, where it's got what appear to be books or newspaper print or something similar making up the buildings and such for no apparent reason. I don't know what the author or artist were trying to say with this book. I'm just lost. I can't get anything out of this book except the message, "People are different." Okay. A person of a different skin color is no more inherently different from you than any other person of your own skin color. Where they live and their socioeconomic background is a lot more relevant to differences in the way they live their life.