Do Little Mermaids Wet Their Beds?

I do believe in mermaids! I do, I do! 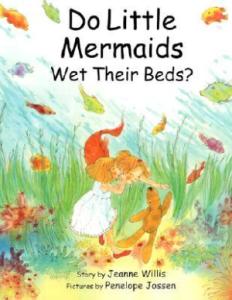 It seems like it's trying to make bedwetting okay-- which it is, for a certain age-- but it has a very mixed message. It's basically trying to say that it's both okay and not okay at the same time, which is really confusing.

There's a four-year-old little girl named Cecilia. It talks about all the things that she can do: she can wash herself, dress herself, and use the telephone (this book was written in 2000, but I kind of feel like most telephones were cordless then), ride a bike, write her name, and she doesn't ride in a stroller anymore. "But I hate to have to tell you this,/she always wet the bed." The next page: "She didn't mean to do it!/But no matter how she tried,/there were stains on certain mattresses/and sheets hung up outside." And her teddy bear has to get washed. She's got plastic sheets. She's trying: she's not drinking very much at bedtime, she keeps trying to go before she sleeps (but she doesn't have to go then). Her mother says, "One day/you'll wake up dry--/It just takes time, my sweet."

Then one night she has a dream about a mermaid. The mermaid says, 'Come play with me.' And she packs her things and writes a note, and gets a suitcase, and goes and finds the mermaid and they go playing in the ocean in a bizarre sequence. And then "They lay down on the seabed/on a mattress made of sand,/and our little girl was happy/for the mermaid held her hand." The mermaid says, "I used to wet /my/ bed./It didn't worry me!/What does a little puddle matter/in the mighty sea?/You'll soon stay dry all night;/till then you're not alone./I'm sure when she was four/the Queen of England wet her throne." (Not only does that not matter, but the Queen of England wouldn't have wet her throne because she doesn't sleep there.) The girl goes home and then creeps upstairs all wet, and then lies down and sleeps. Her mother comes in the morning and says, 'Hey, you're all wet but your bed is dry somehow,' and that's the end. Huh?

This dream somehow magically makes her not wet her bed, but was the dream real, or was it not? She's wet but she's not wet?? The ending pages mention that it was written by a pediatric urologist, and that wetting the bed is normal, and gives some suggestions of how to help, including for "children over five years old, adolescents, and even adults who still wet the bed". Sometimes it helps to just tell children that bed wetting is a thing, like by reading a story about it. It seems like the book is aimed at kids who are having problems wetting the bed, but it wants to have it both ways, by saying it's perfectly normal, but using language that seems to shame the bed-wetter: "I hate to have to tell you this,/she always wet the bed."

For our family, when the kids were bed-wetting age, they wore overnight pull-up diapers. That way, they dealt with the issue themselves, and were able to choose when they felt ready to try to sleep without them. At a certain age, a child's body is capable of waking them up when they need to use the bathroom. Before that age, trying to get them to stop wetting the bed is a losing battle, since they have no control over it. I feel reading this book is just going to reinforce the fact that they have no control over it, and I'm not sure whether that's a good thing or a bad thing, since it can't make up its mind whether to blame or absolve the child. And at the end, when she doesn't wet the bed, her mother calls her "clever". That doesn't seem like the right word to use there, since it's not like she's solving some sort of puzzle.

Even mermaids wet their beds.