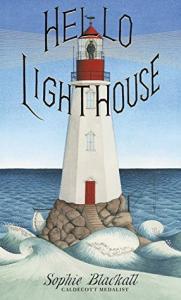 It's cute, I guess. It's basically the story of a man who becomes a new lighthouse keeper to replace the previous one, and he lives in the lighthouse by himself for a little while. Then his wife comes and joins them, and it chronicles their life. He gets sick for a while. A ship crashes when it's really foggy (they're ringing the bell but the ship crashes anyway) and they rescue some sailors. Just little things that happen in their lives. Eventually the the wife becomes pregnant. She gives birth to a child. At the very end, the Coast Guard calls and says, 'Hey, you know we're going to replace the light at the top with machinery so nobody actually has to run this; it'll do it by itself,' and then he's like, 'Okay, bye lighthouse.'

It reminds me of a friend of mine who used to live in a lighthouse. Miles away from any large bodies of water. It had been moved there and was on his mother's property, so he just lived in the lighthouse by himself.

Like the landlocked lighthouse, the book is mostly just for looks. There's not much to it, though it's pretty and well written. There's no real point to it except chronicling a segment of the life of a lighthouse keeper. There's no character development. You don't get a sense of what kind of person the lighthouse keeper is. It's like a poetic retelling of a daily log. There's not really much there to capture your imagination unless you are really into lighthouses. The author/illustrator says in the end notes that she spent a lot of time like looking at lighthouses and never thought about what it'd be like to be inside a lighthouse, and then started thinking about it and fell in love with lighthouses.

I think it would have been more interesting had she picked like a specific event of somebody in the lighthouse and went into more detail about the person and the lighthouse itself.

Lighthouses are really cool, and lighthouse keepers used to be very important.