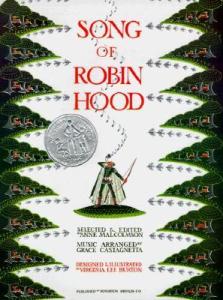 This is not a children's book. It is a collection of old poetry which was not in any way aimed at children originally. It is basically an attempt by the writers to get a really accurate version of a whole bunch of ballads of Robin Hood that were written many years before and to translate them into modern English. As the inner flap says, it is a "work of art." But good grief, it's not for kids. I didn't end up reading very much of it, more skimming it, because it is so dense. This is for people who are researching Robin Hood or huge fans of the legend. I don't believe that even in 1947 when this was published, that people were reading to their kids things like, "Nay, I have no more of my fellows in store,/Or any that I do need./But I have a staff of another oak graff/I know it will do the deed." Nobody talked like that even in the 40s.

It's very artistic. It's very well done, I mean I definitely give it that. But it's not light reading. This is not the kind of thing that kids would be begging their parents to read them again and again. I don't even believe that that was the case in the 1940s. It's a very interesting scholarly work. The illustrations are lovely-- that's of course what the caldecott is mostly about, illustrations-- but it's really not for kids. I don't understand how on earth this was aimed at kids. Maybe it's just that Robin Hood is a legend, kind of fantasy-like, and that's just automatically for kids? Or maybe because it was illustrated by Virginia Lee Burton, the famous children's illustrator? But there's a musical score to this. There's all kinds of stuff. If I was at all interested in Robin Hood beyond just passing knowledge of the story, maybe it would be of interest.

Also of note is that the only contributor who receives a blurb on the back flap of the book is Virginia Lee Burton. It's as if the publisher didn't care about the other two women who spent years researching this. Burton apparently spent 3 years illustrating this, but her drawings wouldn't have had anything to accompany without Malcomson's and Castagnetta's work. It would take a fully literate adult days to get through this book. There are 18 ballads in the book, and I'd have to estimate that each one would take a good day to read to a child, with the way that they tried to keep the English as true to the original as possible. The myth and legend were so important to these three creators, that there's an entire page written by Burton about which plant she decided to use to illustrate each ballad and why she chose that particular flower. Everybody who made this put so much thought into it, and it's a beautiful book. But the 115 page book is enormous, and it shouldn't be marketed as a children's book. It's really a scholarly work.

It's important to preserve cultural heritage such as Robin Hood.