The 12 Sleighs of Christmas 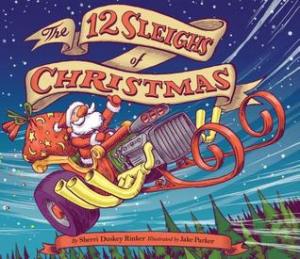 Pretty early on, I knew how this was going to end. It follows a pretty standard pattern, although I was pleasantly surprised by the way that they handled the end.

By the title, it's obviously a Christmas story. Two weeks before Christmas, the elves go to check Santa's sleigh and they find out that it's a mess. There's no way he can use it in that shape, so they talk about fixing it, but somebody says, "Wait, wait. Why don't we come up with new sleigh ideas and we can build them!" So a bunch of elf teams get together and design and build different sleighs, with Santa as the judge for which one he actually wants to take. At this point, my experience with this sort of story kicked in, and I knew he was going to prefer his original sleigh, because tradition always wins in this kind of circumstance, especially when Christmas is involved.

There's a lot of really cool looking sleighs. I think my eldest, vehicle-obsessed, son would really enjoy identifying the different parts of the sleighs, and pointing out the dragster sleigh. He'd be over the moon about the big rig/semi truck sleigh with the tractor trailer for hauling toys. There is also a ship, a snowplow, an airplane, a UFO, a train, and a submarine sleigh, among others.

When Santa comes out, he says all the sleighs are awesome. I think it's great that he has pride and respect for all of their creations, despite not asking for this. He says, "So interesting, so much fun, so clever, each and every one!" But predictably, he continues, "But... nothing seems exactly right, not quite perfect (just... not quite) for this very special night." And, of course, one elf had been fixing up the old sleigh, just in case, with its reindeer and everything, and Santa flies away with it.

Instead of ending the story right there, or having the elves be dejected, it continues with the elves looking around at all the vehicles and going, "Let's race!" So maybe Santa didn't prefer any of their creations, but they like them, and they're going to have fun with them. And there's a little twist at the very end where you see Santa with his sleigh, having crashed into a tree, using a strange-looking phone to call the lead engineer of the elves as he clearly needs a replacement. Extrapolating past the last page, he will probably end up taking one of the many other sleighs that the elves made since there's no other alternative, but the book doesn't reveal which one he will choose.

I don't care for the hackneyed "tradition is best" message, though they handled it relatively well. The illustrations have a weird moire pattern over them. I'm not sure if that's a stylistic choice. It appears on every page, so it doesn't seem like a printing error. The mad science-style engineering (with entire vehicles designed and assembled within a few days) is acceptable, since you're working with elves and magic. The creativity is really cool, even though it's not necessarily rewarded in the expected manner. Everyone just enjoys the process and results. I think they avoided the idea of the old ways being more comfortable and not to avoid the new, and the message ends up being more like, "Creativity is awesome."