Always Room for One More

Give and ye shall receive. 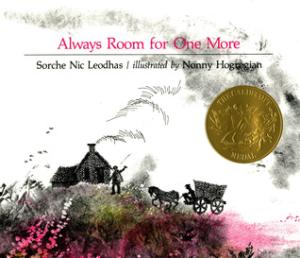 It's a Scottish folk tale. It's been partly adapted into modern English. Basically, there's a man and his wife and 10 kids who live in a small house. It's stormy outside and they have enough food, so he invites everybody who passes by in. A huge mass of people come in, and he's totally cool with that, and they have a big party, and the house falls down because there are so many people in it. They all sit there looking amazed for a minute, and then go, "Wait! Hey! We'll build a new house!" So they build up a bigger house for him, and that's how it ends.

Which is really cool. The guy's generous, and he gets rewarded for it, in kind of a realistic manner. It's a little exaggerated, but basically he gives everything he has, and what he has gets broken, and then fixed by the thankful recipients.

Be generous. Help other people out.