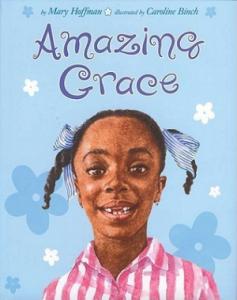 A girl loves to play pretend in all kinds of stories, always giving herself the main character role regardless of gender. In school (she looks about 8 or 9 years old) they decide they're going to put on the play of “Peter Pan” and she wants to be Peter Pan. But somebody says, “You can't be Peter Pan, you're a girl.” And somebody else says, “You can't be be Peter Pan, you're black,” and her family's like, “Whatever, you should try out anyway,” and she does, and she makes it, and she does a good job.

There's not much of a story there, but what's there is good. She's practiced something a lot, and then she gets what she wants because she practiced it, and because it's something she enjoys. There's no deus ex machina, contrived kind of stuff here like many children's books have, which is great. So I like it.