Balloons Over Broadway: The True Story of the Puppeteer of Macy’s Parade

Learn about puppets and parades. 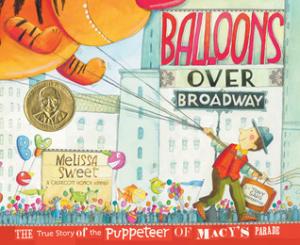 It's a biography of Tony Sarg, who was a puppeteer in the late 1800s to early 1900s. He designed marionettes early on, and was so famous as a puppeteer that Macy's hired him to make automated window displays and then decided to do a parade. He came up with the idea of putting the balloons in the Macy's Day Parade, articulated like marionettes.

The illustrations are cute. It's just a fun story, with all successes and no failures, which is kind of nice. Sometimes he does something and thinks about how to make it better, so there's a lot of improvements but not failures. You would see the failures more in a full biography, but not necessarily one for children. The illustrations are colorful and fun, a bit quirky.

Puppets can be anything you imagine them to be.