Bartholomew and the Oobleck

Even the king makes mistakes. 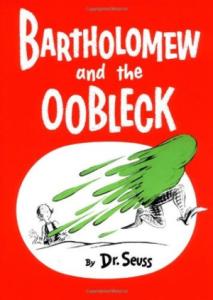 This book has a good message. It's rather old, so it's very wordy, but the idea is definitely good. It's kind of a sequel to The 500 Hats of Bartholomew Cubbins; in this book I guess the king paid Bartholomew enough for his hat that he managed to rise up from being a cranberry farmer and becomes a page boy in the castle. The king is upset that everything that comes down from the sky is boring, so he gets his magicians to make something called oobleck, and even they don't know what it's going to be. It is a sticky green substance that rains down from the sky and gums up everything, and everybody gets stuck, and Bartholomew is panicking. Then Bartholomew basically tells the king, "This is your fault. You're the one who got them to make oobleck. You should apologize." And the king is too prideful to apologize at first, but then realizes that he's sorry. And as soon as he says he's sorry, it says, "Maybe there was something magic in those simple words, 'I'm sorry.'" You know, maybe there wasn't. Maybe oobleck just kind of goes away on its own. But at that point, the oobleck just melts away, and that's the end. And the king declares a holiday to celebrate the things he thought were boring that came down from the sky.

So this is good. It really supports the idea of swallowing your pride and apologizing, accepting the blame for something. I really like that message. The art is kind of strange in that it's black and white except green for the oobleck, so not full color. It's nice how Bartholomew just kind of happens to be the only one who gets through the oobleck, not due to smarts or anything but due to luck. A lot of other people try to help him but can't because the oobleck has gummed up the works of whatever they're trying to use to help him.

Take responsibility for things that you do, even if they're wrong.