I bet a lot of creative kids actually do this, too. 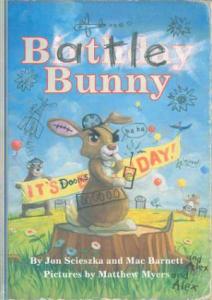 I love this book. It's just awesome. Quite often, I've been looking forward to a book based on the title and concept, only to be disappointed by the execution, but this book did not disappoint. I really enjoyed what they did with this book.

The conceit of the book is that it's really a cute book called "Birthday Bunny" that was given to a little boy named Alexander by his Gran Gran on his birthday. The story of that book is that there's a bunny, referred to as "Birthday Bunny," who wakes up in the morning on his birthday and he goes out and sees all his friends, but nobody acknowledges his birthday or gives him any presents, though they all say "It's a special day" because they've just done something like finished their collection of shiny stones. At the end, the bunny is all depressed, but then his friends pop out and say, "Surprise! Happy birthday!"

However, on top of that trite, boring story, Alexander has drawn pictures and changed words. He's drawn himself into the story and made Birthday Bunny into Battle Bunny, an evil super villain who is trying to destroy the forest. All the animals are changed to be fighting him instead. So on top of the watercolor style art there is scribbled art that looks like it was drawn with a pencil (but darker than a real pencil so it's actually legible and visible). So when the bird is collecting stones, there are fuses on them so they turn into bombs. The animals have chainsaws and hacksaws, and there's a rocket ship and things like that. In this changed story, the evil bunny defeats all of the other forest animals, and at the very end the President asks Alex to fight the bunny and he wins and everybody says he's awesome.

I just love this. It's got so many layers that it's funny to adults, and older kids would definitely understand what's going on here. The humor comes from the juxtaposition of the drawings and original text and the utterly different story with an evil bunny. The original idea of the sappy birthday bunny story which is quite cliche (I'm sure there are hundreds of books out there with the basic elements of the "Birthday Bunny" story. There are a lot of mediocre children's books out there (as you can tell by my other reviews). This not only parodies that, but does it well. I really enjoyed reading this book, although I don't know how much of it younger kids would get. They'd probably like the Battle Bunny story, though. There's definitely a lot of violence (albeit cartoon violence) going on in here that might make some parents a little worried about reading to young kids, but it's really nothing they wouldn't see if they watched Bugs Bunny or Tom and Jerry.

It really captures the flavor of the imagination of a little kid, if the kid was a good writer. Clearly the underlying story is written in just the right way to be easily modified, but in a way that takes more talent than just writing two separate stories. It's just hilarious. It communicates the message, "Make the most of what you've got." The kid has a book that he's not that thrilled with, so he changes it to fit him better. And it's just a demonstration of the crazy imagination of the unseen kid as well as the authors.

Make the most of what you've got.