A Big Mooncake for Little Star 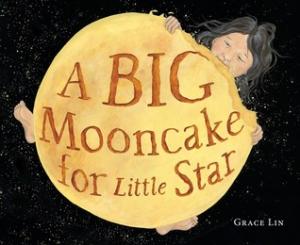 It's kind of a silly book, and the story is rather fanciful. The back flap of the book informs the reader that mooncakes are eaten on the Chinese Mid-Autumn Moon Festival. The only two characters in the book are a young girl (maybe about four or five years old?) named Little Star and her mother. They are both Asian, presumably Chinese. The book takes place in a somewhat artistic black void, alluding to outer space, as the characters are dressed in black clothing with the print of yellow stars on it. Illustrations on the front end paper and the title page actually tie into the story, showing Little Star and her Mama cooking the gigantic mooncake (it's bigger than Little Star by quite a bit). At the beginning of the book, she lays "the Big Mooncake onto the night sky to cool." She acknowledges the work both of them put into making it, saying "It took us a long time to bake", so they should "make it last awhile" and Little Star shouldn't touch it until her Mama tells her to. Little Star agrees and gets ready for bed.

In the middle of the night, she wakes up, having "forgot[ten] everything her Mama had said and only remember[ing] the Big Mooncake." So she walks over to it and takes a tiny nibble, thinks someone might be coming, and runs back to bed. The next night, she remembers it again, and it's still out in the sky, and she goes and eats a little bit more from it. This continues night after night, with a beautiful two-page spread of her eating the mooncake, and it waning like the phases of the moon. Then, "One night, Little Star's Mama went to look for the Big Mooncake." Of course, it's gone, but there's a trail of crumbs she follows back to Little Star. "'Little Star!' Her Mama said, shaking her head even though her mouth was curving. 'You ate the Big Mooncake again, didn't you?'" Little Star admits that she did, and adds, 'Let's go make another one!'

I love the implication that this is a recurring thing that they do, making mooncakes and Little Star eating them bit by bit, and the mother doesn't mind. Little Star isn't in trouble; she's clearly too young to understand delayed gratification. All she knows is: Mooncake is tasty; let's go eat it. Though she understands that she might get in trouble if she eats all of it, so she only eats a little bit at a time, hoping it won't be missed. It seems like this is a ritual between the mother and daughter. It references the moon waxing and being restored, and also reinforces familial love and doing things together with loved ones.

Obviously, nobody is going to claim that the moon is actually a giant mooncake, or that these characters of Little Star and her mother are real. And the author says in the end flap that it's a story of her own invention, and not rooted in mythology, but that she wanted to evoke, "quiet joy, love, and beauty", which are traits that she associates with the Chinese Moon Festival.

In and of itself, it's a really pretty story that has gorgeous illustrations. As a bonus, it's also what those in children's literature call "Own Voices", meaning that it's written about Asian people, by an Asian person. But that's icing on the cake, and the book stands on its own as a good book, with a good message.

Your family loves you even if you make mistakes.