Who are you in the dark? 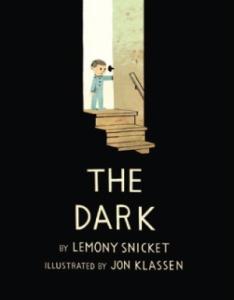 This is especially good for kids who are afraid of the dark. It starts out in a way that can be interpreted as a little bit creepy, just a little bit scary, but even that interpretation changes after you read the ending. There's a little boy who's afraid of the dark, which lives in his house: behind the shower curtain and similar places, but especially down in the basement. Every morning he peeks into the basement and says, "Hi. Hi, dark." And he figures that it's not going to come out and bother him if he visits it. Which is a really sweet little kid thing to do. One night, it comes and visits him in his room. Which basically means that the lights go out in his room, although he still has a flashlight which he sleeps with. The dark talks to him, saying, "I want to show you something." The boy takes his flashlight and goes downstairs into the basement and finds the chest of drawers that nobody ever opens, and the book explains that you need dark places, like a closet, because if you didn't have a closet you wouldn't have anywhere to put your shoes. The dark tells the little boy to open the chest of drawers, and there are light bulbs in it. So he takes a light bulb back to his room and puts it in his light. After this encounter, the boy is no longer afraid of the dark.

It's basically an interesting personification of the dark as something to be respected but not feared. A force of nature, really. It's personified as something which is helpful, nice, and a little bit misunderstood. Not as scary as it first seems.

Respect darkness but don't fear it.