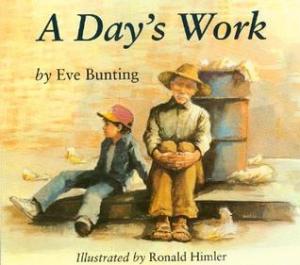 There's a little boy who is Latino in America, I'm assuming, and his grandfather has just come to live with him and his mother. He wants to take his grandfather to become a day laborer. His grandfather doesn't speak English, but the boy does. Somebody comes and asks for a gardener, and the boy lies and says his grandfather knows how to garden. They take the two of them, and the man tells them to weed the garden, but they end up pulling up the good plants and leaving the weeds because they have no actual gardening experience. When the man returns, he gets angry with them, and the grandfather finds out that the boy had lied and becomes upset with him. Then he has the boy tell the man that they'll come back the next day and replant them all and fix everything and not to pay until after they're done, and the man thanks him and understands that it was just a little boy who didn't know any better and says he'll hire him again in the future as thanks for being so honest and hard-working, as gardening is something he can teach him.

The boy is humbled by the quiet integrity of his grandfather and learns his lesson in a more subtle, realistic way than a lot of books with the same moral.