The Dinosaurs of Waterhouse Hawkins

Deducing the whole from the smallest fragment. 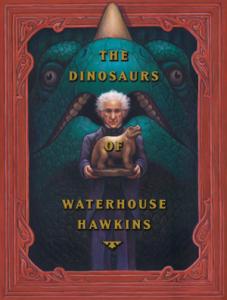 This book has gorgeous illustrations and tells the true story of a man named Benjamin Waterhouse Hawkins, who was responsible for popularizing dinosaurs to the world. The first dinosaur fossils were discovered in London, but were kind of a rare curiosity until a scientist named Richard Owen tried to understand what the larger animal must have looked like and worked with Hawkins, who made illustrations and sculpted models of what the dinosaurs looked like. Even though to us, looking at them nowadays, they look strange and kind of quaint based on our current understandings of dinosaurs, it's pretty surprising how much they got right with the small pieces they were able to find. The book details Hawkins's life starting from his building large models of dinosaurs for the Queen of England and the grand opening of the Crystal Palace and statues, and how those statues were actually constructed. He also began building some statues for Central Park in New York, but a corrupt politician named Boss Tweed (who kids nowadays learn about in school, that's how terrible this guy was) had his models destroyed because Hawkins spoke out against his corruption. Hawkins continued working with dinosaurs, though, painting images of dinosaurs showing the development of life on earth, and helping create model skeletons using the inferences from the small fragments of fossils that they found. The creative genius of this man and his time, and how he ran into problems but persevered beyond that, makes for a fascinating book. All the little details of model construction and the beautiful pictures are informative as well as interesting.

Dinosaurs are awesome, and science is awesome.