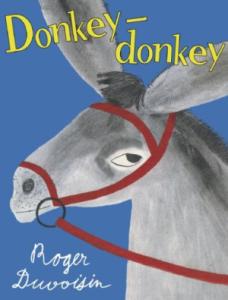 It's not the worst book ever, but it's just not good. There's a donkey, oddly enough named "Donkey-Donkey," despite the fact that almost all the other animals have normal names like a horse named Pat, and a dog named Hector. It describes him as having ears that are "just long enough," although it's unclear whose opinion that is, since Donkey-Donkey is quite unhappy with how long his ears are, especially compared to Pat the horse's ears. He thinks his look "ridiculous," and seeing the two of them together reflected in a stream causes him to become so upset that he refuses to eat anymore. Many people have unhappiness or shame regarding their looks. This is a real problem, and the way this book treats it is quite unfortunate. To try to solve the problem, he goes to the smartest animal he knows, Hector the dog, who is possibly a spaniel of some kind, with drooping ears. Hector tells him he should make his ears hang down like Hector's, and then he will look better.

Donkey-Donkey is happy with this suggestion, until his "very dear friends" all see him and laugh at him because they think he looks funny. That's a horrible thing for his so-called "friends" to do. He's trying something new, in hopes it will make him feel better, and ridicule is just cruel on top of that. The lamb, "Fuzzy-Fuzzy," points out that a lot of animals, like her, goats, and cows, have ears that point straight out, so he would look better that way. He tries it out, and they find a mirror and he likes the look. He is "Happy although somewhat doubtful, as you can see by his expression." Although you really can't, because the quality of the art in this book is rather lacking. And when he tries to walk into the stable, there is a nearby scythe that cuts his stuck-out ear until it bleeds. And he cries all night long, and his "friends" are upset because they can't sleep.

The next day, he asks for advice from the most "honest" animal, the sow, who suggests that his ears should face directly forward, and keep the rain off of his face. But he can't see anything above him, and somehow that causes him to run into a ladder (despite the fact that the ladder should also be touching the ground beside or in front of him) and cause his master, the farmer, to fall on the ground. Both of them get sick from their injuries, somehow.

A sparrow (named Daniel) tells him that he should keep his ears straight up like they were at the beginning, since he is a donkey, and not a different kind of animal. He tries this, and immediately a passing little girl remarks to her father how beautiful Donkey-Donkey's ears are. Basically, he needs external validation to be happy. That's not a valid long-term solution to this problem. The next time anyone tells him his ears look funny, he's going to be back on this downward spiral again. The sparrow's advice is no more valid than anyone else's; it only has to do with what individual animals prefer. Obviously, all the other animals were telling Donkey-Donkey to copy them, and just blindly copying others' personal preferences doesn't work either, but none of this actually addresses the size of his ears, which was his original complaint in the first place.

The worst part of the book is when he tries the first position, with his ears down, and all of his "friends" laugh at him. I could understand curiosity about why he's changed the position of his ears, but real friends empathize with you instead of mocking your choices.

I suppose part of the story is that they're farm animals, and not very bright. There's nothing inherently wrong with holding your ears in any direction, and the only reason Donkey-Donkey has trouble with some of the positions and the other animals don't is that the other animals have held them that way for a long time and are used to it. Donkey-Donkey gives up rather easily on all the other positions, instead of trying them out for long enough to become accustomed to them. He wouldn't have kept cutting his ear on the scythe every time he went in the stable; eventually he would learn to avoid it.

When people are unhappy with their bodies, they are likely to discount others' compliments instead of accepting them. They belittle themselves and assume that the other person is incorrect or just trying to make them feel better. This isn't a realistic treatment of this issue at all. I'm not sure it is meant to be one, but it ends up trivializing something that is a real problem for a lot of people and that's not okay. You have to be the one to be happy with yourself the way you are. It doesn't work to rely on others' validation.

This book would be much better (although still probably not an amazing book) if Donkey-Donkey found his own inner strength at the end in accepting his ears the way they were at the beginning. Maybe even found some benefit to holding them that way, or their length, instead of just finding problems with every other way and defaulting to the original because 'that's what donkeys do.' Or maybe he could have found some crazy way of holding his ears that nobody else did, and become a local attraction. I don't know.

I think the point they were going for in this book is "be happy with yourself the way you are." Although it would be ideal if everyone were, the truth is that many people are not, and telling someone to be happy is horrible advice. It is condescending and implies that you know better than them how they should be acting. It's not okay to dictate how someone else feels. And it works about as well as telling someone, "You should be surprised right now!"

I also can't help wondering whether donkeys are actually physically capable of holding their ears in these different positions.

Rely on others to validate your self-worth.