Cute story about a misplaced toy. 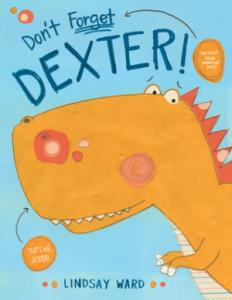 The story: a toy dinosaur named Dexter has been forgotten in a doctor's waiting room by his "best friend, Jack." He feels like it's been forever since he's seen Jack, and asks the reader if they've seen him. Then he asks the goldfish and the receptionist, and begins singing loudly in hopes Jack will hear him. He starts getting scared that he was left intentionally, and that maybe Jack likes car toys better, but reassures himself that dinosaurs are "better than trucks" and tries to escape using a roll of bandages, but fails, fearing that he will be trapped in the waiting room forever. When he has finally given up hope, Jack appears, yelling his name (and wearing a t-shirt with Dexter's picture on it), and rescues him. Dexter claims that he was sure that Jack would return, and that the reader was the one who was "worried", but, of course, the reader knows better.

It really captures the emotions that people go through, especially kids, when they worry that they've been forgotten, with a pervasive humor and dinosaur-toy-specific details. Waiting for someone to return feels like forever, and sometimes the thoughts of permanent separation creep in (like when my husband is late getting home and I can't help worrying that he got in an accident). The fourth-wall breaking is great, as it allows the child being read to a chance to reassure Dexter that things will get better. There's not much to it, but the imaginative personification of a temporarily lost toy. But it's solidly written, and the illustrations are decent, and Jack seems to be depicted as a black child, which is great for the whole window/mirror diversity thing.

Favorite toys are important. Or, family who are separated will find each other.