You would think he would be too short to see over the wheel anyway. 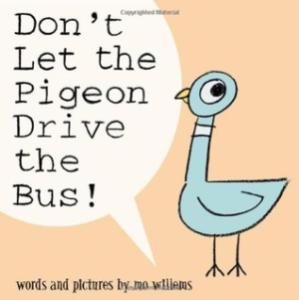 This is a more modern fourth-wall-breaking book. It's a pretty simple story. A bus driver has to take a break, and requests that the reader watch the bus and not let a pigeon drive the bus. The pigeon arrives and keeps begging the reader to be allowed to drive the bus, and after he is repeatedly denied (presumably), the bus driver comes back and drives away.

It's fun because it's interactive, but the only problem is, if you have a contrarian kid who decides to say yes, it doesn't work. Other than that, it's fun, and as the book says, it allows the little kid to say "no" and be more or less rewarded for it, which is kind of good because toddlers like to say "no" to many things despite not being in control.