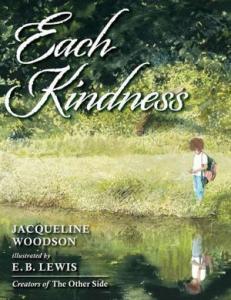 This book is just depressing. It reminds me of "The Hundred Dresses" by Eleanor Estes (c. 1944), except shorter and aimed at a younger audience.

There's a girl named Chloe. She's in school, and the principal brings a new girl named Maya into her classroom. Maya is clearly poor. She's not wearing the right clothes for the winter snow, and the ones she's wearing are ragged and falling apart. The teacher sits Maya in the only open seat, the one next to Chloe. Maya smiles at Chloe, but Chloe doesn't smile back, and actively tries to distance herself from Maya. Maya brings toys to school, like jacks and jump ropes, and asks the other kids to play, but nobody ever wants to. People make fun of Maya because she eats weird food and is poor, and even make fun of Chloe when Maya talks to her. One time in the summer, Maya has a pretty dress, but it's clear to the other kids that it's not new.

One day, Maya is not in class, and the teacher talks about kindness. She brings a bowl into school, fills it with water, and drops a stone into it, which makes the water ripple. The teacher explains, "This is what kindness does. Each little thing we do goes out, like a ripple, into the world." Then all the students get a chance to drop the stone into the bowl as they tell the teacher what kind things they've done. One kid held the door open for someone. One kid helped change her brother's diaper. Even the jerk in class "carried Teacher's books up the stairs." Chloe can't think of anything, even when the teacher says "Even small things count." She passes the stone to the next kid, and then she goes home. Maya never returns to school, and Chloe ends up deeply regretting not befriending Maya. She had the chance, and didn't take it. The teacher explains that Maya's family "had to move away." The book ends with Chloe being really sad and throwing rocks into a pond.

It's like, yeah, it's sad. But does she change her ways in the future? There's no opportunity given for her to show that she has changed; she's just super upset that she wasn't a better person. Really, what if she'd befriended Maya and it turned out that Maya was a kleptomaniac or something? What if she was a narcissist and just used and manipulated people? It's not necessary to be friends with everyone that comes your way. Obviously, they shouldn't have treated Maya as badly as they did.

"The Hundred Dresses" is almost identical in storyline to "Each Kindness." In the older book, a poor girl is a compulsive liar, and claims that even though she wears the same dress to school every day, at home she has a hundred dresses. All the kids make fun of her because she lies and is poor (and is Polish). And at the end, the girl moves away and the main character is depressed by what happened. It's basically that the main characters need to see someone else suffer in order to grow, and they don't realize the opportunity they had until it's gone.

The main characters presumably learn, but it's kind of like the TV Tropes "Informed Ability" (or "Informed" anything) trope: all we get to see is them saying they feel bad. The author is "telling" rather than "showing." The characters don't act on this new feeling (other than throwing rocks into a pond or something). They don't get a chance to demonstrate that they have truly changed, because the story is more dramatic if it ends on a missed opportunity and regret than if it actually ends with the character putting their thoughts into action. I think if the book was interested in truly teaching readers to treat others with kindness and respect, it would work better if it described the rewards of doing so rather than the punishment for not doing so.

Maybe the next time someone is made fun of, Chloe stands up for that person, and earns the respect of her peers and teachers. Maybe the target of the bullying provides a useful service to Chloe, such as friendship or cookies. Sure, kindness and integrity have an intrinsic reward, and I'm all for discussing that once kids are ready to really comprehend it, but they almost always have extrinsic rewards as well. Friends aren't just nice to have, they're beneficial to your emotional and mental well-being. And they can help you out if you need help, just as you would help them. Obvious, external rewards that don't feel as contrived as Maya's leaving coincidentally happening on the same day as the teacher talking about kindness. One nice thing that "The Hundred Dresses" does better than "Each Kindness" is that the main character starts feeling uncomfortable about going along with the group in bullying the poor kid before she leaves, entirely on her own without having the teacher give a lecture about it. It's only when the main character works up the courage to change that the girl moves away just before she can. In this book, Chloe isn't really as involved in bullying, mostly just ignoring, and she doesn't care at all about what she's done until it's all but pointed out to her by a conveniently-timed school lesson.

Be nice to people for niceness's sake. Or, you never realize how much of a jerk you were until after the fact.

not cool if this is raceist

Check out some video read-alouds of this book.

As far as I can tell, Maya is depicted as white, and Chloe is possibly black. She definitely has darker skin than Maya. The other characters are multiracial. It's not about racism specifically. Chloe isn't a "bad person", she's just going along with the crowd and learning that it's a bad idea to do that if other people get hurt.