Come on, baby! Get with the program! 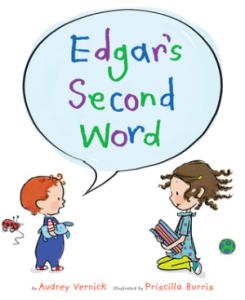 This is a sweet book. There's a little girl named Hazel, and she just got a new baby brother. She wants so badly to read to him and play with him, but at first he's not very interesting. He just lays there like a lump, as babies are wont to do. She's just waiting and waiting for him to say something, to ask her questions. He finally says his first word: "No!" So she thinks, "Great! Now that he's talking, I can play with him." "Do you want to play with me?" "No!" "Do you want to go here?" "No!" That's all the little kid says, is "no." And she gets more and more frustrated, and he gets exhausted over the day. At bedtime he quiets down and reads him a story, and thinks maybe he fell asleep, but he says his second word: "Again." And his third word: "Hazel." Her name.

Which is so sweet. And I can really identify with this. As the mother of two little boys, one of whom is not yet talking, and the other of whom doesn't use complete sentences, I'm still waiting for some of this. For conversations. For him to ask, "Why?" It's happening. It's happening slowly. And every step along the way is precious, but still frustrating occasionally.

Be patient with babies. It'll pay off.