Good for kids and parents, too. 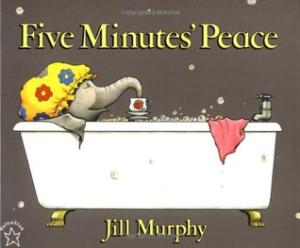 I remember this book from when I was a kid. I can definitely see why my mother had it. There's a family of elephants, the mother Mrs. Large, and three children, two boys and a girl. The mother needs to take a break, but her children don't want to leave her alone. "Where are you going with that tray, Mom?" So she's going to go into the bathroom and have a bath with a tray of food and the morning paper for five minutes. And she really needs a break, too, as you can see from the absolute mess her children are making at the breakfast table. Cereal is all over the place (the youngest has an overturned bowl on his head, milk dribbling down), honey is dripping on the floor, and toys are strewn about. I feel like maybe her phrasing could have been better when she says, "I want five minutes' peace from all of you." That's definitely something I might say to my kids (minus the "five minutes' peace" which sounds kind of archaic), but I'd feel guilty about it afterwards. I'd be worried that the kids might think they were doing something wrong, especially with the stress on the word "you", when usually I just need a break because little things build up over time, or the children are being particularly rambunctious that day (or what is known in scientific circles as "being children"). Parenting is a hard job, but it's nice to see a book that recognizes that.

You can tell that this elephant mother has just reached the end of her patience. All the kids want to come with her to the bathroom, but she says they can play downstairs by themselves. She draws a bath, lays back in the water and closes her eyes... and then her eldest is there in the room with her, asking if he can play a song for her. 'You told me to practice!' So she begrudgingly acquiesces, 'Just one song.' He plays the song several times. Then the daughter appears, wanting to read a page from her book (and ends up reading four), upset that the mother wants her to leave, as she let the brother do something. Does she love the brother more? After the book, the youngest (seemingly a toddler) brings in an armful of toys and throws them in the bathtub, going, "For you!" (Sweet, but frustrating. So relatable!)

All the kids are in the bathroom, so they overpower her and join her in the tub. She gets out, dries off, and heads out. 'Where are you going?' 'To the kitchen, because I want five minutes' peace.' They play in the tub, "And off she [goes] downstairs, where she [has] 3 minutes and 45 seconds of peace before they all came to join her."

I think that any mother of small children can identify with loving your children and wanting to be with them, but needing a break now and then. Of course, your children just want to be with you, because they love you, and you're the most entertaining thing in their lives. They want to read to you, and give you presents, but that's not what you need. You need "me time." Reading this book again as an adult, I identify so much with the characters and also with my own mother, a stay-at-home mom with two daughters.

The illustrations are really cute. The elephants are very expressive, despite not having some human-like facial features. On any page, it's very clear what each of the characters is feeling, and you empathize with every one of them.

Although parents love their children, sometimes they need breaks.