Will the real fishing buddy please stand up? 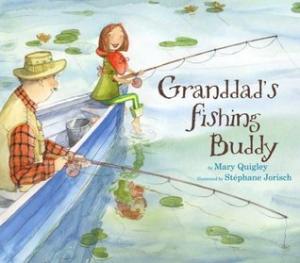 It's kind of cute. Basically, a girl is staying over at her granddad and grandmama's house, and she stays up late overnight to try to make sure she hears her granddad get up in the morning, and he gets up really early in the morning. She goes out and sees him. He's going to go fishing. She wants to go, too, and he considers it for a moment and then says, "Okay." So they go out. He says he's going to meet his "fishing buddy." She says, "You left without him!" But he says, "He'll meet us out there." They see other people in boats on the lake, but none of them is the fishing buddy. She's not sure if she can put a worm onto a hook, because it's kinda gross, but she happens to have some licorice in her pocket, so she baits her hooks with licorice. Then a heron shows up, and they follow the heron because he knows where the fish is. They row around and catch fish, and then go back home, and that's pretty much it.

The granddad is a man of few words. They have a really nice time out on the lake together. It's just about a girl spending time with her granddad. It's kind of cool how it's a girl going fishing, where stereotypically it would be a boy. Maybe younger boys would also be grossed out by putting a worm on a hook. But she's inventive about it, and has a great time with her granddad.

It's fun to spend time with your granddad.